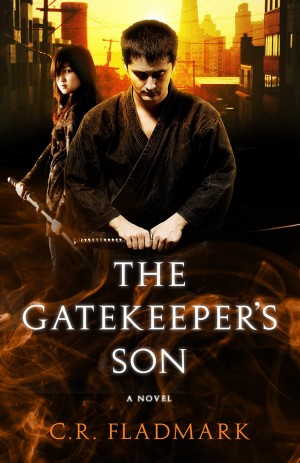 By C.R. Fladmark
2015 FINALIST IN 2 NATIONAL BOOK AWARDS FOR BEST FANTASY!
"Filled with magic, mayhem, and intrigue" --Kirkus Reviews
With the help of a mysterious girl, a San Francisco teenager saves his grandfather's business empire from a ruthless businessman while discovering things about himself and his family that lead him back to ancient Japan and threaten to destroy the only life he has ever known. More
Junya’s grandfather is a billionaire who keeps the secret to his success hidden in a heavily guarded safe.
His mother is a martial artist who wields a razor-sharp katana—and seems to read his mind.
And a mysterious girl in a Japanese school uniform can knock him over—literally—with just a look.

What do they know that he doesn’t?

Junya’s life takes a dangerous turn on his sixteenth birthday, when someone sets out to destroy not only the family’s business empire—the one that he’s set to inherit—but Junya himself. He’s fighting for his life, and doesn’t know who to trust.

What has his family been keeping from him?

Junya’s journey takes him from the narrow streets of San Francisco to Japan, and through hidden portals to the top of the ancient Japanese Izumo Shinto shrine, to places where death and violence are a way of life. And in a mystical world he’s never imagined, he finds his true destiny.

C.R. Fladmark was born and raised in the Pacific Northwest in a place called Vancouver, BC. From an early age, among other more active and sometimes destructive pursuits, he loved to create imaginary worlds and to read books; a lot of comic books including Asterix, Calvin and Hobbes, and Bloom County, thrillers, and far too many Louis L'Amour Western novels. Also, as a teenager, he became interested in all things Japanese (ninja, swords, old temples and shrines, customs), although he had little exposure to the culture.
More than a decade later and after forgetting most of his interest in Japan, he was introduced to a Japanese woman on a blind date. His subsequent travels to Japan (with her) introduced him to the myths and history of Japan that go back thousands of years, to the time when the gods ruled Japan. He now travels often to Japan, where he researches his novels among the ancient sites in Shimane Prefecture.
C.R. Fladmark currently lives in a small, historic town with the aforementioned woman and three lovely children. All of them help with his books with suggestions, edits and the occasional "No, that's just stupid."

You have subscribed to alerts for C.R. Fladmark.

You have been added to C.R. Fladmark's favorite list.

You can also sign-up to receive email notifications whenever C.R. Fladmark releases a new book.