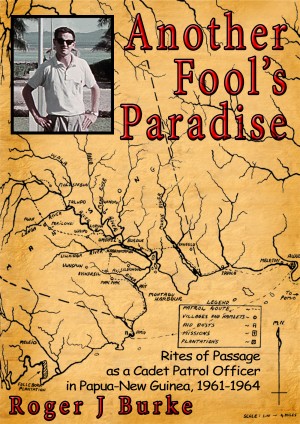 By Roger J Burke
Dreams of adventure become reality when, in 1961, nineteen-year-old Roger J Burke gets a job in New Guinea as a Cadet Patrol Officer. Come with Roger as he tackles the clash of cultures; the harshness and humor of colonial administration; patrolling in country; earthquakes, tropical diseases, and other nasties; investigating murders and suicides; and just missing death by a spear in the gut.... More
In mid 1961, nineteen-year-old Roger J Burke – naïve, idealistic and hopelessly romantic – obtains a job in the Territory of Papua-New Guinea as a Cadet Patrol Officer. After a two-week induction course in Sydney, at the Australian School of Pacific Administration (ASOPA), he and twenty more cadets land at Port Moresby. Following a two-week orientation period that includes a number of embarrassing mishaps, Roger travels first to Rabaul, in New Britain, then to Pomio and finally Kandrian on its south coast. At Kandrian, he engages in road construction, and spends three months alone in the rain forest: learning the lingua franca (Pidgin English); practicing how to conduct himself as an administration official and ex officio police officer; and desperately trying to build roads and bridges, about which he knows nothing.

After three months, he falls afoul of the Assistant District Officer there, and is ‘banished’ back to Pomio. There, he forms a life-long friendship with Peter Hill, a thirty-something expatriate teacher; more than just a friend, Peter becomes a brother and mentor. In between administrative tasks, daily life at a remote patrol post generally encompasses four things: gambling, boozing, talking/joking about sex and playing with guns (of which there are many). Hence, it’s a relief to go on patrol – to avoid gambling losses, if nothing else. So, Roger patrols up and down the coast and inland, for census-taking and tax collection. On one such patrol, he assists the OIC Pomio in the investigation of a mysterious ‘locked room’ death of an expatriate at the notorious Lodi sawmill. It looks like murder, but is it actually a bizarre suicide? Occasionally, officers might get a short break in Rabaul – the District Office – where the comedy of Roger’s sexual awakening and subsequent failed efforts with women in Rabaul are intimately recounted.

Administration life at Pomio resolves to counting and timing earthquakes; documenting weather reports; occasional drunken brawling; practical jokes; endless gambling; and partying at various plantations along the coast – all of which opens Roger’s eyes to the ways of the expatriate world and its effects on human relationships. At one such party, for example, the drunken plantation manager has to be restrained from killing his wife. Roger continues patrolling the deepest interior of New Britain, encountering open rebellion to political indoctrination in two different patrols, and is almost killed while arresting a villager who'd earlier speared another. In January, 1964, he departs from Pomio to attend a year's study at ASOPA in Sydney and, by this time, as a more knowledgeable – if not wiser – young man.
Available ebook formats: epub mobi pdf lrf pdb html
First 27% Sample: epub mobi (Kindle) lrf more Online Reader
pdb
Price: $2.99 USD
Buy Add to Library Give as a Gift
How gifting works
Create Widget
Tags: guns drinking gambling earthquakes parties new guinea patrolling cadet patrol officer colonial administration roger j burke
About Roger J Burke

Roger Burke now lives on the Sunshine Coast of Queensland, north of Brisbane, after having lived in New Guinea, the UK and Canada from 1961 to 1993. He has three sons and a daughter in Australia and twin sons and a daughter from a prior marriage in Canada. Roger's work record includes colonial administration for five years in New Guinea, followed by a long career in IT, starting in 1967, in which he functioned in a variety of roles within operations, programming, systems design and project management. During that time, he has also operated karate dojos and women's self defense courses in Canada and Australia.

His major interests now concentrate on maintaining his website devoted to specialized dictionaries of homonyms and homophones with a goal of amassing the largest such database on the internet - and perhaps the entire world. In addition, he continues to explore the subtleties of their meanings and use within chiastic rhetoric, most commonly exemplified by observations such as: I eat to live, not live to eat (first attributed to Cicero, ancient Roman senator). All such works are available in PDF at that site.

Roger finished two years of a Psychology degree while living in Canada. Upon return to Australia, he instead obtained a BA (Literature & Composition) at Griffith U. in 2007, followed by an MA (Writing) from Swinburne U. in 2009. In development are additional websites for his other works in non-fiction and fiction, most of which will also be published through Amazon, Smashwords and other outlets.

Reviews of Another Fool's Paradise by Roger J Burke

You have subscribed to alerts for Roger J Burke.

You have been added to Roger J Burke's favorite list.

You can also sign-up to receive email notifications whenever Roger J Burke releases a new book.