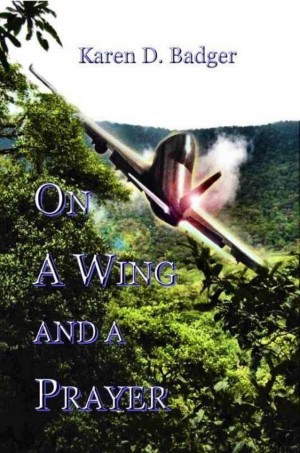 On A Wing And A Prayer

Roxanne Ward is an award-winning science fiction writer. Caught between her own needs and those of her family, she is unable to break free of an abusive relationship.

When Cass sees Rox's portrait on a book cover and decided to send her an email, the friendship that forms between the two women sets off a tumultuous chain of events, rife with danger and suspense.

Karen D. Badger is the author of On A Wing And A Prayer, Yesterday Once More (a 2009 Golden Crown Literary Award winner for Speculative Fiction), In A Family Way, Unchained Memories, Happy Campers, Collective Identity, Sweet Angel, and Relative-ly Speaking, Tailspin and Flashpoint (Books I, II, III, IV, V, VI, VII and VIII of the Commitment Series), The Blue Feather, All My Tomorrows (sequel to the 2009 award winning Yesterday Once More), and 1140 Rue Royale…all of which have been released by Badger Bliss Books, which Karen co-owns with her wife Barbara Sawyer (aka &quot;Bliss&#39;).

Born and raised in Vermont, Karen is the second of five children raised by a fiercely independent mother, who remains one of her best friends. Karen earned her B.A. in 1978 in Theater and in Elementary Education, and in 1994, earned a B.S. in mathematics. In addition to her novels, Karen is the author of many technical papers on photomask manufacturing, which she has presented at numerous semiconductor industry conferences, and is the holder if several technical patents. Karen is currently in her 41st year as a Principal Member of the Technical Staff with a prominent semiconductor manufacturer in Vermont.

Karen and her wife, Barb (a retired Lt. Col., US Air Force) live in the beautiful state of Vermont—home of Ben and Jerry&#39;s. They spend their spare time with family as well as doing home improvement projects on both their homes in Vermont and New Mexico. They also enjoy camping, kayaking, motorcycling and singing Karaoke.

You have subscribed to alerts for Karen D. Badger.

You have been added to Karen D. Badger's favorite list.

You can also sign-up to receive email notifications whenever Karen D. Badger releases a new book.