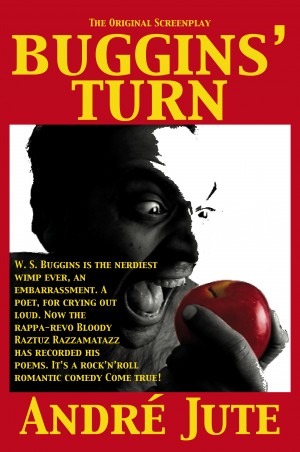 By Andre Jute
Rated 5.00/5 based on 1 review
W. S. Buggins is the nerdiest wimp ever, an embarrassment. A poet, for crying out loud. Now the rappa-revo Bloody Raztuz Razzamatazz has recorded his poems. And Buggins, with only a little prodding from Celia — the beautiful stockbroker — is blossoming into a guerilla consumer advocate. With violence and destruction of property. A rock’n’roll romantic comedy we all wish would come true. More
Buggins' Turn
the original screenplay
by André Jute

André Jute is a novelist and, through his non-fiction books, a teacher of creative writing, graphic design and engineering. There are about three hundred editions of his books in English and a dozen other languages.

He was educated in Australia, South Africa and the United States. He has been an intelligence officer, racing driver, advertising executive, management consultant, performing arts critic and professional gambler. His hobbies include old Bentleys, classical music (on which for fifteen years he wrote a syndicated weekly column), cycling, hill walking, cooking and wine. He designs and builds his own tube (valve) audio amplifiers.

He is married to Rosalind Pain-Hayman and they have a son. They live on a hill over a salmon river in County Cork, Eire.

Buggins. The name alone is as quirky, humorous and downright terrifying-to-the-funny-bone as this well-written screenplay easily suggests. The opening scenes not only gave me a solid glimpse into the ramshackle life of the main character, but also got me laughing, quite literally, way out loud.

The leading woman in Buggins' life is also as provocative in her own charming, electric way. Celia is a formidable force who is the glue that keeps Buggins together through both crisis and victory. Every character has their own place, their own quirks, their own agenda, and it's a form of chaos that lends credibility to the order of things that happen to Buggins from the very moment he encounters each person, friend or foe.

I can't stress it enough; this is a read you won't want to pass up on. Everything that hides in the shadows of our own daily lives gets pounded with the humor bat, and not lightly.

If I was a billionaire with the influence to get the ball rolling in Hollywood, I would produce this for the big screen and rake in the results. So I have to be content with one of the biggest smiles on my face at the end of this story, because it ends as it should. I'm not telling you details about that for a reason. Read it for yourself, but be warned, make sure you're not in a situation where you wake up your household from noisy fits of laughing.

Well done, Mr. Jute. Coming from an old Thespian who has done his own fair share of comedy on the stage in days long gone, that means something. If you write another screenplay, I'll be one of the first to pick it up.

You have subscribed to Smashwords Alerts new release notifications for Andre Jute.

You have been added to Andre Jute's favorite list.

You can also sign-up to receive email notifications whenever Andre Jute releases a new book.