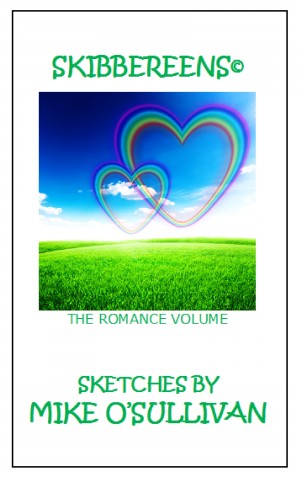 By Mike O'Sullivan
As Limericks are to poetry, so are Skibbereens to short stories or sketches. Mike hopes to have Skibbereens recognised as a new form of creative fiction. Skibbereens are sketches or short stories, primarily light frothy tales, often bizarre or humorous usually with a punch-line at the end. More
This volume of Romance has 14 tales taking a sideways look at love, chance meetings, fate, partners, stereotypes and more......

Almost all the tales are short and can be read in a few minutes on the bus to work or over a quick cup of coffee. They represent a bite out of a different way of seeing the world and aim to entertain.

Mike is an Irish novelist and poet, married and living in Herefordshire England. He was born in Dublin and spent his school years in Cork. In primary school Mike needed to get by the eagle-eyed headmaster who looked hard at his long essays designed to hide the words he could not spell. This carried on further up the line when at UCD the Professor of English likened Mike to another who could not spell, George Bernard Shaw. But Mike made the connection, he did not have to be a genius at spelling.

He moved to London in his twenties and has worked in a wide range of industries – music and cosmetics, in oil exploration, mining, insurance, catering, City Finance and Management Consultancy. Mike uses that experience in his novels. When he first arrived in London Mike fell in with a group of three other Irishmen debating the philosophical process of making a million or finding a job that was more like pleasure. Mike found the job, but it would take too long to explain his philosophy here. Mike says that in a sense he had a plan for life and so far it has been working out.

His novels often start with an individual battling the system but without a plan of how he or she will cope. Mike believes that social systems and institutions are usually rigid when it comes to change or quick decisions and therefore the individual can become trapped. It takes effort, some courage and guile to walk out into the wider world of individual thinking. He shows that an individual can focus enough to even the odds and come out on top. He often uses humour and comedic situations to make his point leaving the reader to consider the underlying philosophy if they wish. A key element of Mike’s writing is the Irish skill of fast paced conversation as Mike’s overall aim is to entertain his readers.

You have subscribed to alerts for Mike O&#039;Sullivan.

You have been added to Mike O&#039;Sullivan's favorite list.

You can also sign-up to receive email notifications whenever Mike O&#039;Sullivan releases a new book.