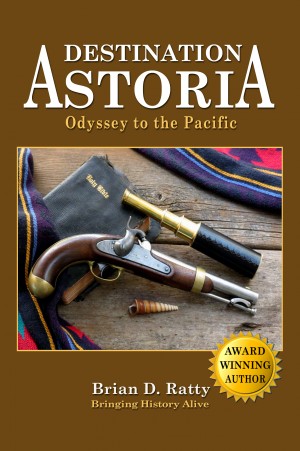 Destination Astoria - Odyssey to the Pacfic

Brian D. Ratty is a retired media executive, publisher and graduate of Brooks Institute of Photography. He and his wife, Tess, live on the north Oregon Coast, where he writes and photographs that rugged and majestic region. Over the past thirty five years, he has traveled the vast wilderness of the Pacific Coast in search of images and stories that reflect the spirit and splendor of those spectacular lands. Brian is an award-winning historical fiction author of four novels and the owner of Sunset Lake Publishing. He is currently writing his fifth novel, which he hopes to release 2016.
For more information: www.DutchClarke.com

In Destination Astoria, by Brian D. Ratty brings alive the little-known, troubled period after the American Revolution, but just before the War of 1812. His descriptions, whether of a waterfront dive in Boston, a U.S. Army stockade in the Louisiana Territory, or a flatboat on the Ohio River all ring true. Ratty shows us the unusual mix of people one found west of the Appalachians in those days, from an Amish family to treacherous “river pirates” to frontiersmen. He demonstrates how each Indian tribe had its own unique culture. He also shows us both the good in people – how Jack, the mountain man, is willing to help Dutch – and the bad – Jack’s disparagement of Indians and African-Americans. All in all, Brian D. Ratty is a master storyteller, and in his excellent book he makes the West of that long-ago era come alive.

You have subscribed to alerts for Brian D. Ratty.

You have been added to Brian D. Ratty's favorite list.

You can also sign-up to receive email notifications whenever Brian D. Ratty releases a new book.