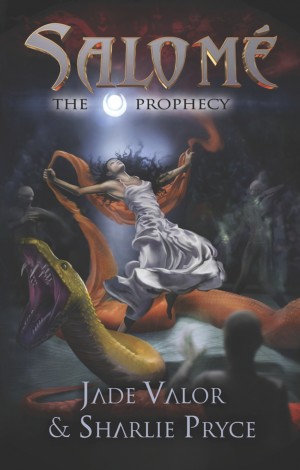 By Jade Valor
In a distant future, ten powerful Magnates rule Earth, holding all mankind in their ever-tightening grasp.

Salomé is born, princess of the Domain of Doreh, daughter of its popular Archlord. Raised in luxury for eighteen years, Salomé is unaware that she is the key to an ancient Prophecy – the long awaited Messenger from a benevolent, mystical world of light, here on a mission to deliver human More
Two Messengers from a world of Light come to Earth in human form and unwittingly become entangled in the web of an ancient Prophecy whose fulfillment could free humanity from oppression.

This modern retelling of the mythical/biblical story of Salomé is a fantasy science-fiction novel that takes the reader on an adventure from the Middle East to all corners of a dystopian world. A Messenger of Light incarnate, Salomé becomes entangled in the web of an ancient Prophecy whose fulfillment could bring peace and freedom to an enslaved humanity.

Set in a future world where technology co-exists with magic, Princess Salomé must discover the source of her own power to challenge her tyrannical uncle and the ten Magnates who threaten to subjugate not only Earth, but also the mystical Homeworld from whence she and her Beloved have come.

Salomé has long been perceived as a seductress and a femme fatale, using her “Dance of the Seven Veils” to depraved ends. Our Salomé” is a strong, sympathetic and proactive heroine, determined to bring peace to her people, against the will of her lecherous and power hungry uncle, Archlord Dorath. No longer powerless and objectified, Salomé strives to free the people of Earth, save her Homeworld and unite with her Beloved.

Awakened to her destiny, Salomé must renounce life as a princess to challenge her tyrant uncle and the ten Magnates who threaten to subjugate not only this world, but also the mystical Homeworld from whence she and her Beloved have come.

What price must the Lovers pay for the freedom of both worlds?

Author Jade Valor fell in love with the opera “Salome” as a student at the Manhattan School of Music, though deploring the wanton, blood-lusting image Salomé had been given when her only sin was to become enamored with a gorgeous hunk of prophet who then spurned and cursed her.

This was the beginning of a decade-long journey to give Salomé back her innocence that took Jade from NY to Germany where she eventually met her writing partner. It led her to Wellington, New Zealand in 2003 with a first draft of a “Salomé” screenplay where she met “Lord of the Rings” production people – and was told she should write the novel. The journey continues – in the hope that “Salomé” will become the epic motion picture she was originally intended to be. Jade now lives in the beautiful “Middle of Middle Earth”!

Jade Valor is a native New Yorker. Having studied acting, music and opera in her hometown, she moved to Germany where she performed and worked behind the scenes in opera, theater and television. She has been teaching voice and singing for over twenty years. Her novels, "Salomé - The Prophecy" and "Salomé - Revelation", were inspired by her love of myth and fantasy and her passion of many years for the Oscar Wilde drama and Richard Strauss opera of the same name. This collaboration with Sharlie Pryce, who she met and began writing with in 2001, is part of Project Salomé that includes a screenplay version they hope will one day become a film. A great fan of "The Lord of the Rings" - both J.R.R. Tolkien and Peter Jackson - Jade made the long journey to the Middle of Middle Earth (Wellington, New Zealand) with the first draft of the "Salomé" screenplay, to be there for the world premiere of "The Return of the King". Two of the people from the production who she met there have kept in touch over the years and been incredibly kind and encouraging with regard to the "Salomé" project. Living in Wellington since 2008, she is involved in theater and film, sings and coaches voice, American accent and presentation with actors, vocalists and business people. Sharlie Pryce was born in London, England of Jamaican parents. She has always loved to weave fantasy tales, sketching bi-weekly comic stories for her closest school friends. She studied dance, singing and acting, which took her from Gothenburg, Sweden to Hamburg, Germany where she started her professional career. Sharlie has performed in theaters and television, done voice-over work and coached presentation skills. Meeting Jade Valor was the turning point in her career that kick-started her passion to write. Jade's desire to redeem the figure of Salomé of her femme fatale image was the beginning of their decade-long collaboration on Project Salomé. Sharlie lives in Hamburg, Germany where she coaches corporates in presentation skills and business English, and continues to perform.

You have subscribed to alerts for Jade Valor.

You have been added to Jade Valor's favorite list.

You can also sign-up to receive email notifications whenever Jade Valor releases a new book.