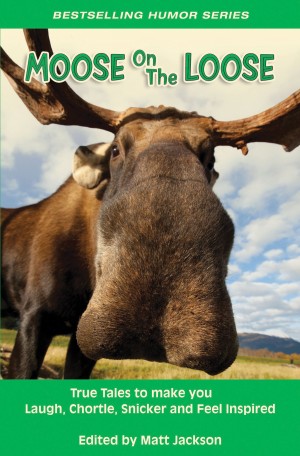 Moose on the Loose: True Tales to Make you Laugh, Chortle, Snicker and Feel Inspired

By Matt Jackson
Travel brings with it extraordinary moments—from the whimsical to the hilarious to the downright absurd. By following in the footsteps of previous bestselling humor titles such as "Mugged by a Moose" and "A Beaver is Eating My Canoe," our twenty-six writers continue to celebrate those moments. While outlandish things can happen on the road less traveled, there's no such thing as a bad story! More
Welcome to the wacky side of travel.

Travel brings with it extraordinary moments—from the whimsical to the hilarious to the downright absurd. At Summit Studios we’ve celebrated many such moments in our bestselling humor series, which includes titles such as "Mugged by a Moose" and "A Beaver is Eating My Canoe." Now in our sixth volume, twenty-six travel and outdoor writers join forces to relate more wacky tales of misadventure. And if there’s one truth that can be gleaned from this collection of stories, it’s that while outlandish and unpredictable things can happen on the road less traveled, there’s no such thing as a bad story!

* Join Sylvia Shawcross on a cross-Canada road trip with a giant moose head attached to the roof of her family’s van.

* Read about the chicanery of cyclist Brent Curry as he attempts to outwit a con artist posing as a devout church reverend from Kenya.

* Save a drowning monkey with Rita Pomade and her husband, and then discover why having a monkey as a sailboat crewmember has many drawbacks.

* Listen with mole-in-training Sterling Haynes to an unexpected conversation between airplane pilots while sitting on a runway in Houston.

* Navigate a cross-cultural dilemma with Maureen Magee after a stranger proposes to her while working on an African film set.

* Join B.A. Markus on the hot seat after she inadvertently sets fire to the Gulf Islands home she’s agreed to house sit.

And many more stories....

A graduate of Wilfrid Laurier’s Business Administration program in Waterloo, Canada, Matt Jackson was lured away from the corporate world by the thrill of adventure journalism while still a university student. He is now an author, editor, photojournalist and professional speaker, and is the president of Summit Studios, a publishing company specializing in books about travel, humor and the great outdoors.

Matt’s first book, "The Canada Chronicles: A Four-year Hitchhiking Odyssey," is a Canadian bestseller and won the IPPY award for best North American travel memoir in 2004. He has edited eight anthologies of short stories, including bestselling titles "Mugged by a Moose," "A Beaver is Eating My Canoe," and "Never Trust a Smiling Bear." His writing and photographs have also been featured in more than two dozen popular magazines such as Canadian Geographic, Equinox, Backpacker, Explore, Canoe & Kayak, and BBC Wildlife.

He lives with his wife Stacey and daughter Louise in Victoria, BC, where they spend as much time hiking and kayaking as possible.

You have subscribed to alerts for Matt Jackson.

You have been added to Matt Jackson's favorite list.

You can also sign-up to receive email notifications whenever Matt Jackson releases a new book.