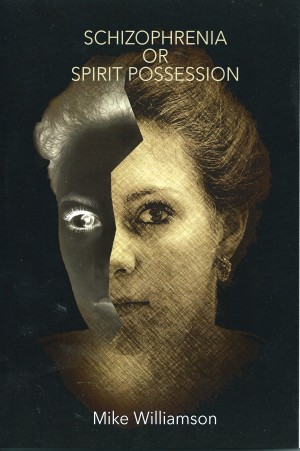 By Mike Williamson
This book is about the misconception that schizophrenia is a mental disease. I discuss the possible causes put forward by medical science and show how the mind and the brain are not the same. How medical science will not accept the duality of man and insist the problem with schizophrenics is the brain instead of interference through the mind. How people have recovered without powerful drugs. More
While working as a medium over the past 35 years, I have met many people who thought they were mentally ill because they were hearing voices. There are people who will live their lives taking drugs they don't need, because the medical profession don't believe people's brain can be affected by discarnate spirit. There are other causes for hearing voices and having mood swings etc. Like the side effects when taking medication and certain illness's. When these have been eliminated then there can be only one cause.
Scientists study the brain looking for abnormalities to explain the voices when the problem is from another source, the spirit world. The criteria for diagnosing Schizophrenia is discussed and found inconclusive and it can be seen that if medical science was right. Then anyone who is in touch with the spirit world, including mediums and psychics are either Schizophrenic, Bi-polar of have Multiple personality disorder.
The brain is like a receiver, it receives information from external sources through senses such as sight, sound, touch, smell and taste.
There is another sense called the sixth sense. This information is received in the brain in the same way as the physical sense except there is no physical presence to the sensations received. This can lead to conflicting and often confusing information that the conscious cannot process correctly as it has no relationship to the physical world.
If we consider the brain as the receiver and the conscious as the physical then the subconscious is the spiritual part of our reality.
The energy that is life is spiritual, which is where the mind resides and where we store all the knowledge and experiences of our existence. When we remember something we are accessing our mind, much like a computer does the hard drive, to bring the memory to the consciousness.
Like a computer that has access to the internet the brain has access via the mind to the spiritual reality. Unfortunately like a computer which can be affected by a virus the brain can also be affected by other minds in the spirit world. The brain doesn't always recognise the location the information is coming from and so will accept it as genuine. It's only by tuning the receiver or brain that we learn to recognise the correct location. There can be times when the information received is coming from a malevolent source, this can lead to misconceptions about what is and isn't right.
This book explores the problems the lack of understanding regarding the brain and the mind causes people who are misdiagnosed with a mental illness such as schizophrenia which is not a disease. Yet 1% of the world population is misdiagnosed every year, that's 51 million each year. According to the National Institute for Mental Health.

Mike Williamson was born in London in 1946, at the age of 23 he married and moved to Surrey where after having two children moved into an old farmhouse. He quickly discovered the house was haunted. His family were very frightened. Unable to find anyone who could help he had to learn for himself how to rid his family of unwanted spirits. His fight against evil took him down a long road of self discovery and into the realms of the spirit world via his and wife's guides. They taught Mike and his wife how the spirit realms work and how to defend his family from the forces of darkness. Once he had developed his mediumship he taught others how to fight the evil from the spirit realms. He then went on to help hundreds of families to live in peace by removing the evil from their homes. After 35 years he wrote a book about his journey 'Working in the Realms of Spirit' which was published in 2012. He has since written a second book 'Schizophrenia or Spirit Possession' which shows how he was able to help many people who had been wrongly diagnosed as mentally ill when they were getting spirit interference. Schizophrenia is not a brain disease and Mike shares his experiences of some of the people he met who thought they were destined to take powerful and often mind altering drugs for the rest of their lives.

You have subscribed to alerts for Mike Williamson.

You have been added to Mike Williamson's favorite list.

You can also sign-up to receive email notifications whenever Mike Williamson releases a new book.