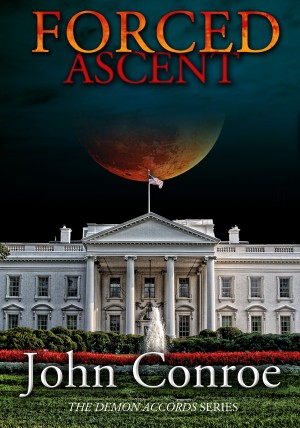 After 32 years in banking and personal financial planning and 10 years of fiction writing I chose the writing. Now a full time author with 19 books in two series, I craft stories of urban fantasy and near future science fiction.

I hunt paper targets at the range, dabble in martial arts and take long walks on Maine beaches with my wife (a woman of supernatural patience).

“John Conroe's first book does more than display his familiarity with the currently popular sub-genre of vampire stories. It also showcases a truly individual and engaging storytelling voice. With intelligence and sly humor, Conroe has crafted a tale that is more than mere genre fiction. It's a truly engaging and rewarding read.” – Joseph Bruchac, award winning author of The Skeleton Man and co-author of the best selling Keepers of the Earth series.

Also in Series: The Demon Accords

A series such as John Conroe's Demon Accords deserves to be treated as a whole rather than as disconnected tales. However, it's hard to get even one's most ardent fans to review every book in such a series. (Take it from me: I'm another writer of such series.) Beyond that, it's rash to review a series of closely connected books after reading them only once. So, in the spirit of "Do unto others as you would have them do unto you," I resolved to read the series twice through before reviewing it. I've just completed the second trip through them.

From a technical standpoint, there's a lot wrong with these books. There's too much in-stream backstory and exposition, which ejects the reader from the story's timeline until it's behind him. There are miscellaneous inconsistencies and implausibilities throughout, especially as regards the sudden development of new powers by protagonist Christian Gordon. Overall, Gordon and co-protagonist Tanya Demidova are too powerful for the sake of good drama; their opponents almost all fall before them like wheat before a sharp scythe. There are many errors of spelling, grammar, and punctuation. There are even errors in the spelling of characters' names. The author makes profligate use of the exclamation point, and there's nothing that screams "amateur" like reliance upon the exclamation point to intensify one's prose.

I love them anyway.

One of the great absences from contemporary fiction is the wholly admirable hero. Indeed, one of the most compelling reasons to read - or write - is the need for hero figures, persons who epitomize that which every good man ought to aspire to be. In Chris Gordon we have a paragon of the old style, who knows right from wrong and never turns from defending the right, regardless of the potential cost. His beauteous and powerful mate Tanya and the unique, immensely appealing relationship between them are merely delightful icing on a scrumptious cake.

The enemies Conroe pits against Chris and Tanya range from the "just doing our jobs" enforcers of the will of power-obsessed public officials, through the officials themselves, all the way to creatures of so pure an evil that Sauron might tell them "Hey, dude, lighten up." There's no question who the good guys are, even on the occasions when Chris misperceives the situation before him. Despite that, and despite the extreme nature of Chris's God-and-virus-given powers, his adventures are never repetitive. Indeed, the betrayal by his supposed supporter Nathan Stewart left me hoping that somewhere in the upcoming books Chris exacts bloody, wholesale vengeance from the regime that wants to imprison him and his love forever.

There are important social observations and even more important moral points made in these books. In particular, the disease of power-lust is brilliantly depicted. The Garth regime's determination to control, clone, or kill Chris at any cost illustrates the key attribute of the power-worshipper: he never willingly accepts the possession of power by anyone but himself. That's so uniform among politicians of all places and times that you'd think it's a point that doesn't need to be made...so why are so many people willing to trust governments, the natural habitat of all power-seekers? But I digress.

The Demon Accords series shows how good, exciting storytelling can overwhelm even a huge host of other faults. Given my own obsession with technical precision, it's a reminder I probably needed.

Carry on, Mr. Conroe. Five stars. (But please, remove the exclamation point key from your keyboard.)

You have subscribed to alerts for John Conroe.

You have been added to John Conroe's favorite list.

You can also sign-up to receive email notifications whenever John Conroe releases a new book.