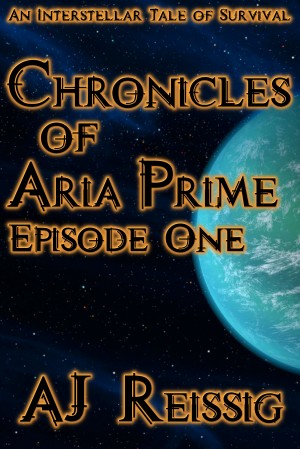 Chronicles of Aria Prime, Episode One

By AJ Reissig
Rated 4.00/5 based on 1 reviews
The year is 2285 and the PCS Trident, one of Earth's heavy cruisers, is on her final voyage. On route, the Trident is viciously attack by Karakan battleships, forcing the ship to crash land on the planet of Aria Prime. Here they find medieval world filled with creatures and races of mythology, not all of whom are friendly. Can they survive? More
An Interstellar Tale of Survival…
The year is 2285 and it has been ten years since the bloody interstellar war with the Karakan Empire. Earth and her allies enjoy the peace, and an interstellar migration to colonize the galaxy is under way.
The PCS Trident, one of Earth’s heavy cruisers, is on her final voyage. The mission: transport equipment and colonists to the settlements on Alpha Ceres. On route, the Trident is viciously attack by Karakan battleships, disabling long range communications and faster than light drive. Stranded millions of miles from the nearest friendly outpost and without communications, all hoped seemed lost.
Colonel Christopher Nash, commander of the Trident, makes the bold decision to navigate his crippled vessel to Aria Prime, the only habitable planet within range. Not much is known about Aria Prime, but probe data suggest a primitive planet inhabited by a people stuck in the medieval era. Once on the planet surface, the crew and colonists of the Trident begin a struggle for survival. Everything is in short supply, and much of the advanced technology of the 23rd century has been rendered useless. As physical labor replaces mechanization, unrest grows.
Nash journeys to the nearest native settlement, where he befriends the diminutive tillers. Unfortunately, these people are under constant attack from a marauding race known as the drogs. Nash quickly puts an end to the drog’s looting, and offers the tillers protection in exchange for free trade and information on the local lands. The tillers agree, but will the offer be the catalyst which spawns a war in this medieval land?
Chronicles of Aria Prime is an edge-of-your-seat Sci fi thriller that blends a multitude of science fiction genre. The adventure begins as a tale of interstellar travel, but quickly morphs into a space opera. Once on Aria Prime, the story takes on elements of sci fi fantasy, and post-apocalyptic survival. This fast-paced novella is the first in the Chronicles of Aria Prime serial.
Download: epub mobi (Kindle) pdf more Online Reader
rtf lrf pdb txt
Price: Free! USD
Add to Library
Create Widget
Tags: action space opera science fiction future space sci fi survival
About AJ Reissig

AJ Reissig lives in New Richmond, Ohio with his lovely wife Christina and children. Born in 1973, he grew up in the small river town of Moscow, Ohio. He is a graduate of the University of Cincinnati with a background in chemistry. After spending several years as an analyst in manufacturing, he began to pursue writing as a part-time freelancer. His hobbies include gardening, woodworking, home improvement, and anything outdoors.
Following the mantra of writing what you like to read, AJ writes political fiction and science fiction novels. His first novel series, FreedomRedux, revolves around a United States of the future that is governed by a totalitarian regime that is bent on world domination, and those who wish to restore the United States to the nation that the founding fathers intended. In 2011, he started the political blog FreedomRedux to express his libertarian political beliefs. In 2012, he founded Freedom Notes Press, LLC to publish political novels.
In 2013, AJ began his venture into science fiction with the novella series Chronicles of Aria Prime. Combining elements of both sci fi and fantasy, the story revolves around an earth ship transporting equipment and colonists to the settlements on Alpha Ceres. On route, the vessel is attacked and forced to crash land on the planet of Aria Prime. Once on the planet, they find a world stuck in the medieval era, filled with creatures of fantasy.

I enjoyed reading this story a great deal. AJ has worked some of the classic SF themes in an interesting way. I am glad there will be more to come because I love a good story! I did stumble across a number of spelling mistakes, the kind that computers do not usually catch; that is my specialty. My rates are quite reasonable and would love to help AJ polish this and future jewels, at his request. The author can reach me at tinman97030 at yahoodotcom.

You have subscribed to alerts for AJ Reissig.

You have been added to AJ Reissig's favorite list.

You can also sign-up to receive email notifications whenever AJ Reissig releases a new book.