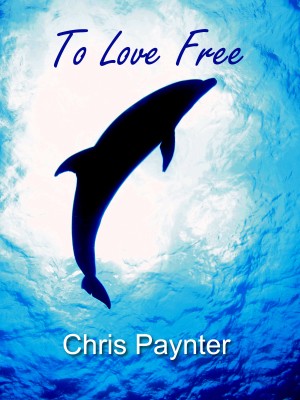 By Chris Paynter
World-renowned artist Madison Lorraine leads a quiet life in Islamorada, Florida, with her nine-year-old daughter, Mo. Madison hasn't painted in over three years since her wife and muse, Callie, lost her battle with cancer.

Supermodel Gabrielle Valenci's arrival at her family home in Islamorada unsettles Madison's comfortable routine. Gabrielle has left a floundering relationship behind in New York and travels to Florida to undergo the last of her chemotherapy. Her prognosis is excellent, but her journey since the initial cancer diagnosis has been rocky.

The appearance of a dolphin in their cove coincides with Gabrielle's arrival next door. With each unannounced visit, he inspires Gabrielle and Madison as he gently nudges them together. Soon, Madison is accompanying Gabrielle to her treatments. Although the bond between them strengthens and their mutual attraction grows, both are hesitant to take the next step. Can they learn To Love Free again?

Chris Paynter is the author of nine novels, including the Playing for First baseball series. Her Survived by Her Longtime Companion was a 2013 Lambda Literary Award Finalist in lesbian romance and winner of the 2013 Ann Bannon Popular Choice Award. Her short stories have appeared in two anthologies: Women in Uniform: Medics and Soldiers and Cops, Oh My! (2010), published by Regal Crest, and Love Burns Bright: A Lifetime of Lesbian Romance (2013), published by Cleis Press. After earning a bachelor degree in journalism, Chris worked as a general assignment reporter and sportswriter until accepting her current position as the managing editor to three law journals. A sports junkie, you can find her screaming at the TV during an Indianapolis Colts game or living vicariously through her Cincinnati Reds. She resides in Indianapolis with her wife, Phyllis, and their beagle, Princess Eleanor. When not writing or editing books, Chris loves to get lost in a good romance.

Reviews of To Love Free by Chris Paynter

You have subscribed to Smashwords Alerts new release notifications for Chris Paynter.