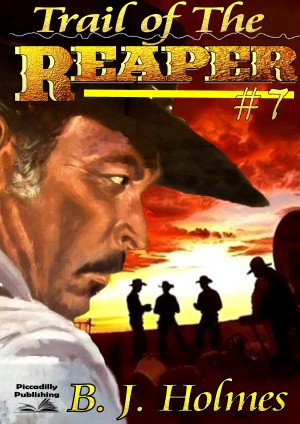 Grimm Reaper 7: Trail of the Reaper

Leaving school early with few qualifications, Bryan Holmes went to work in a factory and then, in his own words, "got cheesed off, jacked it all in and went to university." Upon graduating he went to work teaching economics in a College of Advanced Technology and stayed in the profession for the rest of his working career. Bryan started writing seriously in the 1950s, but it was only in the mid-1970s that he turned to the western. "The odd thing is I'd never read a western until I'd written my first. Of course, I've read many since -- either to see how others do it or to read the books of writer-friends -- but I originally fell into the genre quite by accident." After The Avenging Four was accepted for publication, Bryan never looked back. In addition to a steady stream of accomplished westerns, he also began to sell short horror, crime and SF stories in the fields of science fiction, "and hearing actors speak my lines on the BBC, no less."

You have subscribed to alerts for BJ Holmes.

You have been added to BJ Holmes's favorite list.

You can also sign-up to receive email notifications whenever BJ Holmes releases a new book.