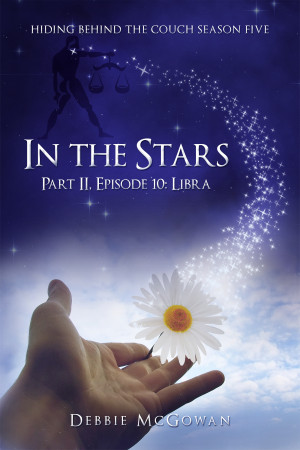 The story follows chronologically from In The Stars Part I (Season Four) and Breaking Waves (Novella). It continues in A Midnight Clear (Novella), Red Hot Christmas (Novella) and Two By Two (Season Six).

‘Libra’ is the tenth episode of In The Stars. For those readers unfamiliar with the series, ‘Capricorn’ (episode one) re-introduces the main characters, so you could pick it up from here and perhaps catch up with the previous books later.

In The Stars explores the day-to-day lives of The Circle—nine friends from high school, now it their late thirties—following them through celebration, loss, illness and life-changing decisions.

Each episode covers the period of time indicated by the zodiac sign from which it takes its title.

In The Stars Part II is season five in the Hiding Behind The Couch Series.

The story follows chronologically from In The Stars Part I (Season Four) and Breaking Waves (Novella). It continues in A Midnight Clear (Novella), Red Hot Christmas (Novella) and Two By Two (Season Six).

What readers say about the Hiding Behind The Couch Series:

“The remarkable characterisation in these novels is what makes them for me.”

“This story reminds me of my favorite movies about friendship and relationships.”

“Few authors have explored the depths of longtime friends within a group, or ‘circle’ the way Debbie McGowan has!”

Reviews of In The Stars Part II, Episode 10: Libra by Debbie McGowan