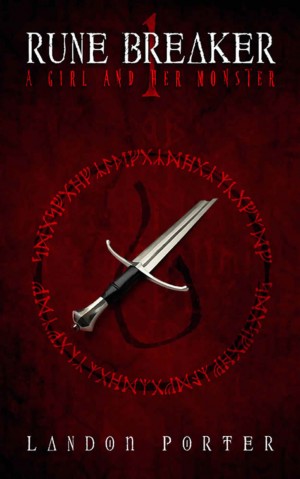 A Girl and Her Monster

By Landon Porter
The escaped slave Taylin accidentally frees and becomes the master of an ancient wizard known as Ru Brakar. Together, they are must find a way to survive in a world neither understands while Taylin deals with fate having forced her to keep Ru as a slave against her will. More
There is a legend in this world of a weapon that only the most wicked of souls seek. It has passed down through the years since before the coming of the gods and each time it's been found, it granted its master the power to conquer. The power to rule. In the past, it was known by another name, but now it is only known by Rune Breaker.

After decades of dormancy, it just found a new master.

Only this time, things will be different. The new master of the Rune Breaker is an escaped slave-soldier of the Hailene Army of Ascendancy. She never sought the weapon. She does not want to conquer or rule.

Making that choice won't be easy, for the Rune Breaker is not a sword or bow, but a man; a shapeshifting mage bound to serve whoever finds him as punishment for his ancient crimes. And his sentence has done nothing to reform him. Now, with a villain from before history bound to serve a heroic soul, the question must be answered: Can evil be turned to the cause of good, or is the taint of darkness all corrupting and absolute?

Before they can find out, they must brave a world alien to both of them and the attentions of a foe who stalks them in hopes of gaining access to a power beyond the gods.

Landon Porter is a proud geek who enjoys comic books, roleplaying, and gaming. He knows a d20 from 2d10, the Konami Code and why Pi Day is March 14. A fan of all things Fantasy and Sci-Fi, he's been writing about them on the web since 2002 and has been telling stories since before he could write.

His best known works are the superhero web fiction series, 'The Descendants' and the dungeonpunk fantasy Rune Breaker.

An avid fan of Fantasy, Science Fiction, Roleplaying Games and Superhero comics, his works tend to mix and blend tropes from each into new an original creations.

His writing philosophy heavily emphasizes themes of family, hope and redemption, rejecting the idea that works must be bleak and dark to be realistic and meaningful.

You have subscribed to alerts for Landon Porter.

You have been added to Landon Porter's favorite list.

You can also sign-up to receive email notifications whenever Landon Porter releases a new book.