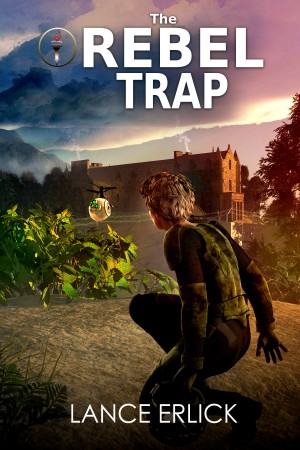 By Lance Erlick
Despite being a military recruit, sixteen-year-old Annabelle Scott rebels against her restrictive régime by refusing to kill a handsome boy she fancies and helping him escape. Auditory implants and cameras allow her commander to watch her 24-7. Can she help the boy free his brother from a heavily guarded geek institute without destroying her family or getting killed? More
“This book is a great stand-alone … plenty of plot twists to keep your attention.” – Bri Masters

“Annabelle. She fits right up there with Katniss and Tris” – Terri LeBlanc

Perfect for fans of the Hunger Games, Divergent, and Maze Runner. The Rebel Trap is the second book in a science fiction thriller series in which a young woman is drafted into the elite military to enforce laws she believes are wrong.

A second American Civil War ended in a shaky stalemate with the country divided into the “civilized” Federal Union and the warlord-controlled Outland. Annabelle lost her biological parents to the conflict when she was little and was adopted by a member of the Union’s political opposition. The loss of her parents and her adoptive mom’s opposition leads Annabelle to be rebellious in a society where conformity is everything and disobedience is punished.

Drafted into the elite military to capture escaped boys, she stayed true to her conscience by helping Morgan to escape, but there are consequences. He hacks her implants to plead for her help to rescue his brother from a heavily guarded geek institute. Suspected of helping Morgan and with her mom in the opposition, Annabelle risks getting the boy and his brother killed, her mom framed for treason, and her and her sister imprisoned, killed, or sent to the Outland as slaves.

Unable to get either her commander or Morgan out of her head, Annabelle can’t confide in anyone, which tears at her bond to her sister and mom. As a pawn in a bigger game, who and what can Annabelle trust, including whether her mission is the commander’s vendetta? Can she find a way to help Morgan and discover the link between an attempted assassination of her mom, the geek institute, and her corrupt police captain without leading Morgan into a trap or destroying herself and her family?
Available ebook formats: epub mobi lrf pdb
First 10% Sample: epub mobi (Kindle) lrf more
pdb
Price: $3.99 USD
Buy Add to Library Give as a Gift
How gifting works
Create Widget
Tags: thriller scifi teen action adventure dystopian strong female lead sf thriller female action hero dystopian action thriller
About Lance Erlick

Reviews of The Rebel Trap by Lance Erlick

You have subscribed to Smashwords Alerts new release notifications for Lance Erlick.