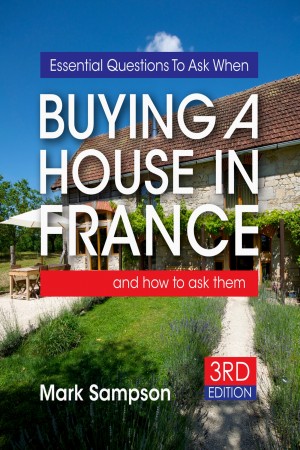 Essential Questions To Ask When Buying A House In France

By Mark Sampson
Toying with the romantic idea of buying a house in beautiful France? Benefit from the experience of someone who has done it before and who can guide you past the potential pitfalls. This indispensable book will spell out some of the essential questions that you'll need to ask of agents, vendors, legal, fiscal and financial parties and - above all, perhaps - yourself. More
You’re planning to take the plunge and invest in your dream: a property and a life in France. How can you be sure to avoid mistakes? This book will take you step-by-step through all the questions you need to ask, such as:

• Has this property been treated for infestation?
• Is there mains electricity?
• Is there a possibility of purchasing further land?
• How far is the local school/hospital?
• Are there any plans for development in the area?

Use the benefit of someone else’s experience to guide you through questions about the structure of the building, about letting the property and the availability of workmen. Each topic will include a brief discussion of why it’s important, touching on relevant French laws and systems.

All the phrases are translated into French, with a pronunciation guide.

I am a writer, journalist and 'book-maker' based in South-west France. Born in London and raised in Belfast, I studied English Literature at Exeter University and American Studies at the University of Sussex in Brighton, where I met my wife, Deborah.
We moved from Sheffield to France in 1995, not long after the birth of our daughter. We later moved from the Corrèze to the Lot, in 2003, to build the straw-bale house featured in the UK's TV series, Grand Designs Abroad. The programme is available somewhere on You Tube.
I have written stage plays, screenplays, children's books and two books of non-fiction. The second, 'Essential Questions to Ask When Buying a House in France' was updated in 2012 as my first published eBook.
As a journalist, I have written for most UK newspapers and many magazines, including France Magazine and Living France. As an on-line DJ for www.expatsradio.com, I also review Latin jazz and other world music for Songlines magazine.

You have subscribed to alerts for Mark Sampson.

You have been added to Mark Sampson's favorite list.

You can also sign-up to receive email notifications whenever Mark Sampson releases a new book.