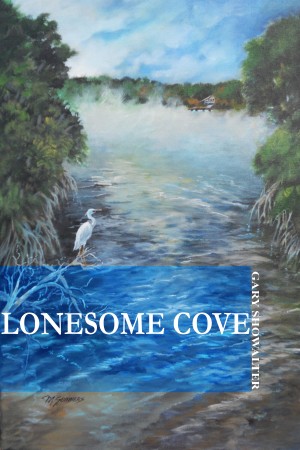 By Gary Showalter
Terry Rankin isn’t so sure about his new client, Gianni Lupo. Gianni is an old man, just released from prison after serving the full twenty-five years of a Life sentence for a double murder in Miami. But Terry figures the man’s paid for his crime and now he’ll spend his declining years tottering around his home on Sanibel Island. What could possibly go wrong? More
"Lonesome Cove", my fourth novel, fully two years’ worth of research, writing, editing and rewriting, is now available for purchase. It is a tale about the search for a missing woman, the granddaughter of a Mob hitman released after serving twenty-five years in prison for a double murder. It’s also about a dirty cop, Latino gangs, and revenge. And three tons of gold, stolen off a ship in the Port of Miami back in the early 80’s. It’s still missing, you see…

Gary Showalter was born in Honolulu, Hawaii. He lived in Aruba, Florida and the Panama Canal Zone before joining the U.S. Army during the 1960s. Mr. Showalter has picked cotton in East Texas, baled hay in Ardmore Oklahoma, sold light bulbs in Los Angeles, California, and built cattle pens in Fallon, Nevada (during a blizzard, of course). After settling in Atlanta, Georgia, Mr. Showalter worked as a professional gardener before turning his hand to furniture making.
In 1981, he moved to Israel, married, and raised four children while working as a furniture maker, silversmith, goldsmith, and ornamental wood turner. He served in the Israel Defense Forces Reserves for sixteen years, and when not on active duty he worked in government and private security. He has also served in senior management positions in two software development companies in Israel.
Mr. Showalter has published articles dealing with international terror and the Israel-Arab conflict in the Jerusalem Post, Israel national News and several political science web sites.
Mr. Showalter returned to the United States in the fall of 2003. He published his first novel, “The Big Bend”, in the fall of 2008, his second novel, “Hog Valley”, in 2009, his third novel, “Twisted Key”, in 2010 and his fourth novel, “Lonesome Cove”, in 2011.
Mr. Showalter resides in Dunnellon, Fl, where he is working on the fifth Terry Rankin novel.

You have subscribed to alerts for Gary Showalter.

You have been added to Gary Showalter's favorite list.

You can also sign-up to receive email notifications whenever Gary Showalter releases a new book.