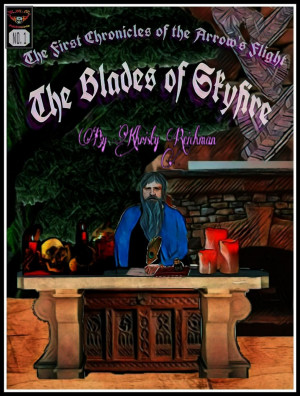 The First Chronicles of the Arrow's Flight: The Blades of Skyfire

By Khristy Reichman
The influence of the shade grows straining ancient ties between the inhabitants of Eden. Maurus gathers his forces to exact vengeance over man and elves alike. The children of the Skyfire must unravel the secrets kept by the dead in order to save their world. More
maurus, leader of the shade, gathers his forces to exact vengeance over an and elf alike; the sins of their ancestors can never be forgiven. "we takes what is owed from them, it is ours by right. it is time we rid our world of these invaders who dared to desecrate our world." unseen forces from the spirit world drive the dead to rise again. ancient ties between former allies are strained as the shade plague their minds with paranoid delusions. maurus knows the key to his success is reliant upon the tainting of the bloodline of the true kings. the blade of Skyfire, forged long ago to be used by the first king of two races, only his descendants can use the blade. He watched from the shadows as the blades fire slowly died with each passing generation. The corruption of the courts grows, the old king is dead and his declared heir has failed to ignite the blade. "now is the time to strike, their bodies shall be our hosts in payment of what they took." arrow, true heir to the thrown, was hidden amongst the elves of the skyfire mount from the time of his birth. his tranquil world erupts in war, now he must draw together what is left of his segregated people. with the Blade of Skyfire in hand, he leads his army against the undead, in a final battle that will determine the fate of their world.

Khristy Reichman was born November 27 1972 at Mchord Air force Base in Tacoma, Washington. She traveled extensively throughout the United States due to her fathers career as an air force pilot. Her early interests in writing science and fantasy fiction developed out of living close to the products of aviation science and her fathers stories of foreign countries. She attended Northwest Community College in Powell, Wyoming where she studied art and literature as a liberal arts major. She now lives in Illinois where she works as a sole proprietor in housekeeping and freelances in writing and cover designs. 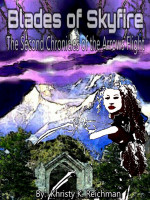 You have subscribed to alerts for Khristy Reichman.

You have been added to Khristy Reichman's favorite list.

You can also sign-up to receive email notifications whenever Khristy Reichman releases a new book.