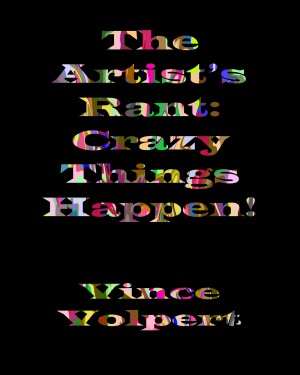 Vince Volpert (signed as V.V.) is an independent artist. He has had several art classes throughout his academic career from the Chicago-land area. The artist’s work is influenced based on still life scenery (using acrylic and watercolor paints.) His paintings, from his short story book series (soon to be revealed and announced) is influenced by Rod Serling’s television series The Night Gallery (as well as The Twilight Zone), in which the artists, Jaroslav “Jerry” Gebr, and Tom Wright, painted abstracts or literal representations of the story being presented on the television series. V.V. uses multiple mediums for his work, which includes: fine tip pen work, acrylic paint, watercolor paint, water color pencils, colored pencils, and chalk. He will soon explore the use and techniques of oil painting/paints in future artwork(s). Stay tuned, more to come!

Vince Volpert is an independent writer. He writes for entertainment. His novel series, The Artist’s Rant (TM) (Copyright 2012-2014), has been in development for several years. He continues to create new stories for the series. In addition, he has several other novels on the way, independent to The Artist’s Rant (TM) series (Copyright 2012-2013 Vince Volpert) series. Stay tuned!

You have subscribed to alerts for Vince Volpert.

You have been added to Vince Volpert's favorite list.

You can also sign-up to receive email notifications whenever Vince Volpert releases a new book.