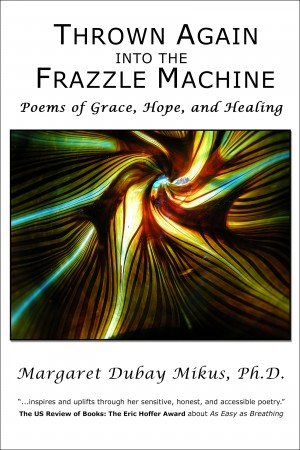 Thrown Again into the Frazzle Machine: Poems of Grace, Hope, and Healing

By Margaret Dubay Mikus
May these poems be a lifeboat, offering comfort, healing, inspiration, and hope. Although telling a personal story, aspects might express something you want to say or help someone you care about. I should tell you right off it has a very happy ending as I came through what seemed like a long black tunnel, “the only way out, is through….” More
These selections from my poetic journal, small slices of a complex life, share an ultimately hopeful story. Various threads are woven over time into a narrative arc: ongoing medical events, my longtime deep connection to my husband, the closeness of our family of four, and celebrating my relationship with my mother through poems inspired by our Monday phone calls. I grieved her loss and also that of my youngest brother, my father-in-law and mother-in-law, and many other close family members and friends in five-year period. My youngest sister, Dorothy, was diagnosed with aggressive stage 4 breast cancer. The disappearance of a friend of my daughter (a girl who used to sit at my kitchen counter) profoundly affected me as a mother (“For Kelly’s Mom” and “Vanished”). I selectively read the news and wrote about it. The “Walking Series” poems are peaceful meditations of being present in nature. Many people inspired me, many people helped me. I am most grateful. When I was pulled into the medical realm, the poems more narrowly focused on that world. As I emerged from an intensive healing period, the poems became more wide-ranging again.

Even in the hardest times, not every minute is relentless conscious healing work. Sometimes you need a vacation from grief, a respite in nature, a good laugh, a nap, a walk, a book, singing, a silly movie, talking with a friend about anything else, some sliver of perspective. You want to feel normal, to remember that there is life apart from all the dark, a life you can slowly move towards—in zigs and zags—as the days go on.

Change is possible. Healing is possible. It is possible to heal our whole selves, to heal relationships, to heal our severed connection to our life purpose, and to heal trauma, whatever the cause. We can heal our past and set a new course for ourselves free from old ingrained injuries. If one person heals, healing energy radiates out from them with the possibility of healing their families and communities. We all benefit as it spills over to all of us.

Margaret Dubay Mikus is a poet, singer, healer, photographer, and storyteller. She earned a Ph.D. in Microbiology from the University of Chicago in 1982, headed for a promising career in molecular genetics research and teaching. Life had other plans. After healing from multiple sclerosis in 1995, she had a creative reawakening which led her to begin a poetic journal to “sing from the Heart.” A year later she was diagnosed with breast cancer. Writing turned out to be an essential part of Margaret’s integrative approach to healing. Later, she used her poems as writing prompts when teaching her "Expanding Our Possibilities" (TM) workshop series. Her poems, photos and essays have been published in literary journals, magazines, newsletters, and anthologies, both online and in print. She was honored to be the Illinois Featured Author for the "Willow Review" in 2013. Her acclaimed poetry collections and inspiring CD have supported many people in making positive life changes. Margaret met Stephen Mikus in an English class when they were at the University of Michigan. They have been married since 1974 and have two grown children. More about her work and her uplifting story can be found on her website, www.FullBlooming.com. Check out the 67 poem-videos and essays with other poems on her blog.

Reviews of Thrown Again into the Frazzle Machine: Poems of Grace, Hope, and Healing by Margaret Dubay Mikus

You have subscribed to alerts for Margaret Dubay Mikus.

You have been added to Margaret Dubay Mikus's favorite list.

You can also sign-up to receive email notifications whenever Margaret Dubay Mikus releases a new book.