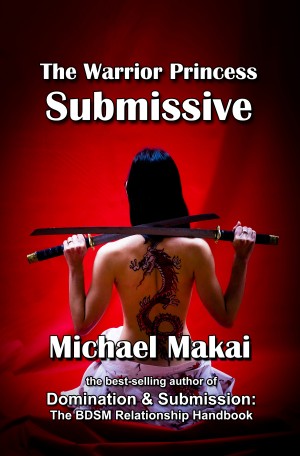 This definitely isn’t a woman in a precarious predicament waiting helplessly for her White Knight to arrive and slay a dragon for her. This was a woman who, as she is kicking the dragon’s ass, smiles at the White Knight standing on the sidelines and says, “Hey, buddy! Feel free to jump right in and lend your sword to this fight. Otherwise, stay the hell out of my way!” The Warrior Princess doesn’t need or want a rescuer. The Warrior Princess needs an ally that she can rely upon in the chaos of battle. She seeks a warrior equal to the tasks that she has already chosen for herself, and is demonstrably capable of accomplishing with, or without, his help. She is willing and able to fight the good fight alone, but welcomes the notion of having a worthy partner, fighting by her side. And yet, when the day’s fighting is done, she is perfectly at ease with considering herself entirely His - heart, might, mind, body, and soul.

Michael is a combat veteran and a retired senior Army noncommissioned officer with over 20 years of active military service. He has worked as a marketing consultant, banker, freelance writer, magazine publisher, and internet broadband service provider. He is an incorrigible word-maker-upperer who enjoys skiing, traveling, playing Scrabble, and raising koi. He currently resides near Wichita Falls, Texas.

I read this book in a single afternoon! This has immensely helped me reconcile my aggressive, feminist side with my submissive self. I have always been curious about D/s and BDSM, for years and years but never really understood my place in it. How could I, an independent, ass-kicking woman, also be a submissive? This was like hearing back a therapists review of my personality...at times it was a little unnerving to be perfectly honest. Now that I have read it, my husband is going to read it, and I can only expect that it will prove very useful for him too!

Having read the author's first book in this series, "Domination And Submission, The BDSM Relationship Handbook", and also wondered where was the submissive counterpart to the ineffable Dom, I was very keen to read this book and find out a) what a Warrior Princess Submissive was in terms of being the 'Ineffable' submissive, and b) What makes her so special above all the other submissive types outlined in the first book. What I didn't expect, was to find myself bursting into tears by chapter six in the book! This was not because I really didn't think I was a Warrior Princess Submissive, despite the numerous similarities that I seemed to share between the various submissives described that make up the ineffable submissive, but more because those descriptions brought some very long buried questions and answers from my own childhood that I had never quite been able to understand. This book quite literally hit me directly in the solar plexus, and laid them bare before my eyes. How this could be, I will never know, but my new understanding of events and circumstances floored me beyond belief, and all I could do was weep. I now know so much more about myself than I would have thought possible before. This book turned me inside out.

Mr Makai went into the subject of the Warrior Princess Submissive so thoroughly, it was clear He has an enormous source of expertise at His disposal, despite not having included this class of submissive in His first book. The explanation for this seems to be that this submissive alone is going to be so important to the salvation of the BDSM lifestyle in months, much less years, to come, that she clearly warrants a whole book to herself to fully explain who she is, what she is, and how she is going to be called upon to do this. He also informs us as to what she is not. Mr Makai describes her as "the submissive for the 21st Century" and already this is becoming extremely apparent. He starts this book by submitting not one, not two, but three prefaces, and in one of these He admits His 'verbiage' may not be to everyone's taste, but makes no apology for this and reminds the reader that He is also an incorrigible 'word-maker-upperer' and enjoys being so. Once you get passed the unusual at times verbiage, the book does indeed draw you in, and is a very good read. The serious bits, are interspersed with His characteristic "My Two Cents" at the completion of each chapter, whereby He uses His own personal stories and anecdotes relevant to the information in that chapter. These are to me, very valuable insights aiding understanding to the chapters themselves, and make for a much more interesting and informative read, than if they weren't there at all.

There is even one of His famous quizzes in the book to find out if you are a Warrior Princess Submissive. As with all His previous quizzes, this is supposed to be primarily a fun exercise and not to be taken as a definitive guide as to whether you are or aren't a WPS or one of the other types of ineffable sub. I was actually very surprised with my own results, which require further discussion and clarification before being taken as read, so to speak.

I couldn't sleep after I started this book last evening, so at 3 a.m. I had to - HAD TO - climb out of bed quietly, sneak into the living room, make some coffee, and finish the damn thing! It wouldn't let me go once I started reading. I've should have known it was going to do this to me when I first tripped over a workshop title "The Warrior Princess Submissive" earlier this summer. It started a fire in my belly that has smoldered patiently awaiting the release of the book.

When I read the workshop synopsis I became teary eyed because it was the first time in my life that "who I was" made some kind of sense. The idea that there might be people in the world like me and people who get me was a lifeline. I have lived decades with this screaming need inside of me to surrender, to submit to my Beloved. I wanted to live with the freedom of knowing that at the end of hard fought battle, my Beloved would grab the back of my neck, kiss me roughly and tell me the fight was over now. I was HIS to protect now. I wanted, needed to let him fight for me as well as beside me. I'd never known a protector's love, not really. And I wanted it desperately.

With the exception of my early life, all of my battles have been with enemies that threaten the freedom and joy of the people I love, as well as mine. I found out very young that if you stand up, most of the time the bully sits down. And it they don't? Well then you gotta "go to the mattresses."

Devouring the book last night and this morning has energized me. In fact, it's as if I'd had a full night's sleep. No enemies on the horizon - but should they appear I'm more than equal to the battle. I put down the reader stunned that someone I've never met could understand the fight that plays out in my mind daily as I make my way through this world. I feel liberated this morning and for that I offer a heart-felt "thank you, Mr. Makai."

You have subscribed to alerts for Michael Makai.

You have been added to Michael Makai's favorite list.

You can also sign-up to receive email notifications whenever Michael Makai releases a new book.