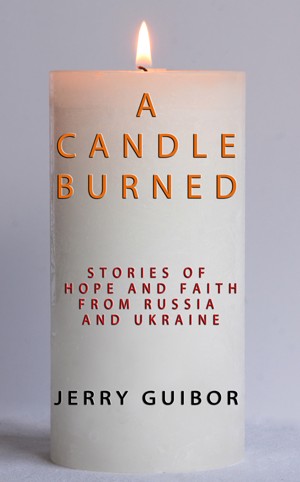 Jerry Guibor, a native of California, was graduated from then-San Jose State College with a bachelor's degree in journalism. Over the next 40-plus years, he worked as a photographer, reporter, page designer and editor at newspapers in California, Arizona and Oregon.
In 1994, he moved to Rostov-on-Don, Russia, where he served one year as a missionary. After several subsequent short-term mission trips to Russia and Ukraine, he moved to Kiev, Ukraine, in 2004 and lived there for 13 months, working again as a missionary. The stories in this book were told to him by his friends from those two countries.
Jerry is retired from the newspaper business but continues to travel to Ukraine as a missionary. He has two married children and five grandchildren, all of whom live in Arizona. He resides in Fresno, California, where he operates a photography business, JG Photography.

Reviews of A Candle Burned by Jerry Guibor

You have subscribed to alerts for Jerry Guibor.

You have been added to Jerry Guibor's favorite list.

You can also sign-up to receive email notifications whenever Jerry Guibor releases a new book.