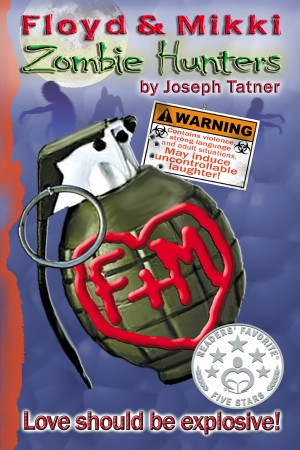 Rated 3.50/5 based on 2 reviews
5-Star Review: Comedy horror love story about two people lost in a shattered world populated by the undead. With wry humor and snarky comments, Floyd and Mikki come to rely on each other, their wits and whatever supplies they can scrounge in their daily struggle to stay alive. They encounter plenty of action, colorful characters and riveting horror on their way to the last safe zone in America. More
5 Stars! Floyd and Mikki save the day!
Reviewed By Anne-Marie Reynolds for Readers’ Favorite:

"Floyd and Mikki: Zombie Hunters" by Joseph Tatner is a zombie book with a difference. For two years, Floyd has been travelling alone, trying to survive in a world inhabited by zombies as he makes his way towards New California Haven - the last safe haven on Earth. On his journey, he spots a light in a town and, against his better judgment, stops to investigate. There he finds Mikki, a young woman who is the sole survivor of the town. They join forces and make their way towards New California Haven, blasting zombies at every turn. Along the way, they meet up with other pockets of survivors, some genuinely looking to survive, others called Raiders who will kill anything that stands in their way - undead or living. Mikki rescues a zombie kitten for a pet. Laugh out loud at every turn as Mikki and Floyd discover each other and a passion for survival.

There are so many great elements to this book; I hardly know where to start! Let me start by saying how quickly and completely I fell in love with not only the characters, but the story as well. It was fast paced, full of action and explosions and had a tone to it that was just different from many other zombie books out there today.
I try not to rehash the blurb in my reviews, but I think it’s necessary here to get an idea of what’s going on. Floyd is a loner. Surviving on his own in his apocalypse rigged truck he has managed to avoid getting himself killed or turned into a zombie.
One night, he meets a football helmet-wearing survivor named Mikki, who, like him, has managed to survive by being cautions and learning how to adapt. Mikki has used textbooks and a mostly inaccurate and battered copy of a zombie apocalypse survival guide, in which she’s made plenty of her own notes to help guide her through these dangerous times.
Neither is used to having company and they have both seen the horrors of being too trusting in this world. Mikki had a hard life growing up and she has grown into one strong, gun toting, ass kicking, and explosion loving kind of girl. Though I can’t recall if her age is mentioned, I believe she generally avoids the question and she seems a bit immature at times and it’s implied that she’s younger than she appears. She has a hard edge to her because of her pre-apocalypse history, but she also exudes an air of sexiness that can’t be denied. Mikki is quite intelligent and creative as well, though due to the stupidity of the nature of most men, all they see is a pretty face. Floyd and Mikki decide to stick together, at least for a little while, and their story is nothing short of amazing.
Floyd seems like an everyman. He has good values, he’s smart, and is mechanically inclined. He could be any decent man, which makes him, as a character, easy to believe in. He could be my dad, my husband, or a hundred other men I know. At the same time, he isn’t ordinary.
I love Mikki. She is probably one of my all time favorite literary characters, female or male. She’s headstrong, sexy, smart, yet very sweet in her own way. She puts on a threatening face, and don’t get me wrong, she’s a serious fighter, but inside she just wants someone to love her. I think it’s easy to relate to her as a woman because we never want to be seen as weak just because we are female, so many of us have to try harder to be taken seriously. Her sense of humor had me laughing aloud. Just the way she interacts with Floyd made me want them to be together. Whether as friends or as more, I didn’t care as long as they were together.
Overall their story and the book overall really draws you in and makes you want to continue reading. All of the characters, including the zombies are believable; well, at least as believable as a zombie can be. This isn’t just a zombie survival story, the author is really able to bring life into this book and make you see that even at the end of civilization there are still good people out there.

Can an American-lovin' Texan and a hot, blonde bombshell team up against zombies?

At first, the story reminded me of Tremors, a movie about two hick friends from a nowhere desert of a town fighting against these giant, man-eating worms. It had comedy, gore, and strategic adventure all wrapped into one. This book is kind of like that as you had two unlikely characters (one being a gun-wielding, sharp-shooting Daisy Duke) pairing up and clashing with their fast talk and domineering personalities, which generates a refreshing, temperamental comedic tone.

However, the story didn't quite captivate me from the start and it only slowed my progress as we delved more and more into government conspiracies, bureaucracies, and the zombie apocalypse. For some reason, I thought Floyd and Mikki were teenagers (their names certainly make them sound like that) and perhaps I would've enjoyed it more if they were, especially since zombies are not really my forte.

This is kind of like the zombie version of Independence Day--it's basically a long, raging battle of survival for the human race. It would definitely be good for those who are into horror and adventure.

You have subscribed to alerts for Joseph Tatner.

You have been added to Joseph Tatner's favorite list.

You can also sign-up to receive email notifications whenever Joseph Tatner releases a new book.