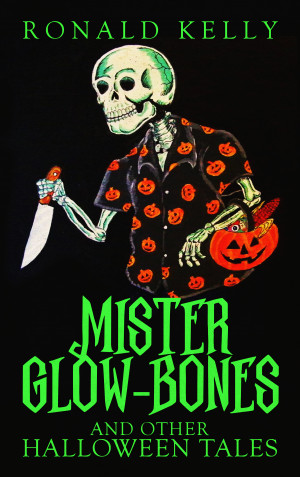 Mister Glow-Bones and Other Halloween Tales

By Ronald Kelly
Halloween is more than a holiday; more than a fun time of candy and costumes for the young.

Stories included in this collection:
Mister Glow-Bones
The Outhouse
Billy’s Mask
Pins & Needles
Black Harvest
Pelingrad’s Pit
Mister Mack & the Monster Mobile
The Halloween Train
The Candy in the Ditch Gang
Halloweens: Past & Present
Monsters in a Box More
Halloween is more than a holiday; more than a fun time of candy and costumes for the young. It is inoculated into our very being at an early age and there it remains. As we grow old, it grows dormant… but it is still there. For the lucky ones, such as us, it emerges every year, like a reanimated corpse digging its way out of graveyard earth to shamble across our souls. And we rejoice… oh, if we are the fortunate ones, we most certainly rejoice.

So turn these pages and celebrate our heritage. Blow the dust off the rubber mask in the attic and hang the glow-in-the-dark skeleton upon the door. Light the hollowed head of the butchered pumpkin and string the faux cobweb from every corner and eave.

It’s Halloween once again. Shed your adult skin with serpentine glee and walk the blustery, October streets of long years past. And, most of all, watch out for misplaced steps in the darkness and the things that lurk, unseen, in the shadows in-between.

Ronald Kelly was born November 20, 1959 in Nashville, Tennessee where he was raised a Southern Baptist. He attended Pegram Elementary School and Cheatham County Central High School (both in Ashland City, Tennessee) before starting his writing career.

Ronald Kelly began his writing career in 1986 and quickly sold his first short story, "Breakfast Serial," to Terror Time Again magazine. His first novel, Hindsight was released by Zebra Books in 1990. His audiobook collection, Dark Dixie: Tales of Southern Horror, was on the nominating ballot of the 1992 Grammy Awards for Best Spoken Word or Non-Musical Album. Zebra published seven of Ronald Kelly's novels from 1990 to 1996. Ronald's short fiction work has been published by Cemetery Dance, Borderlands 3, Deathrealm, Dark at Heart, Hot Blood: Seeds of Fear, and many more. After selling hundreds of thousands of books, the bottom dropped out of the horror market in 1996. So, when Zebra dropped their horror line in October 1996, Ronald Kelly stopped writing for almost ten years and worked various jobs including welder, factory worker, production manager, drugstore manager, and custodian.

You have subscribed to alerts for Ronald Kelly.

You have been added to Ronald Kelly's favorite list.

You can also sign-up to receive email notifications whenever Ronald Kelly releases a new book.