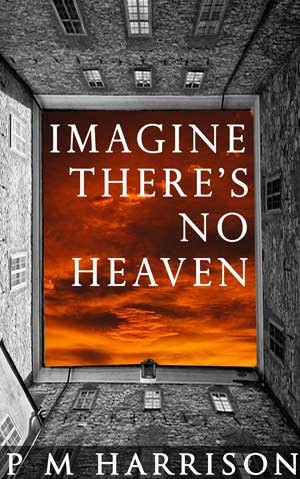 London, England, present day. Eighteen year old Guy Cormun has it all going for him: good looks, smarts, and a promising future. There’s just one problem: he’s tortured by his past, by the mystery that shrouds his family, the mystery of his long lost mother.

In a world which has turned its back on him, Guy must fight to discover the truth about his past, and to slay the personal demons that threaten to lead him to ruin. With the help of beautiful student Yasmin, and equally beautiful teacher Gina, Guy will discover the truth behind his family. But will the truth lead him to freedom or into the abyss?
Download: epub mobi (Kindle) pdf more Online Reader
rtf lrf pdb txt
Price: Free! USD
Add to Library
Create Widget
Tags: romance love coming of age family war teen

Lack of craft is more than imagined in Imagine There’s No Heaven.


I want to thank P.M. Harrison for his hard work and commitment to this worthwhile endeavor.


Guy is a disturbed young man in his late teens. When he was three years old his mother, Imogen, a medic in the armed forces, went on a special rescue mission and never returned. She was listed as missing in action.

For some reason, Guy blames his father, Jerry, for his mother’s death. How Jerry could have prevented Imogen from obeying a direct order, or why she would consider disobeying one since she evidently was an enlisted officer, is not explained.

Guy has anger issues and is in a special ed. class in high school. Why is a kid with anger issues in a special education class for students with learning disabilities? Just another of a growing list of inconsistencies that plague author P.M. Harrison’s novel Imagine There’s No Heaven.

Gina is the instructor in this class and has a special relationship with Guy. It seems she has issues over the death of her young brother and feels if she can help Guy it might assuage some of the guilt she still carries.

As the story develops it becomes apparent that to resolve his issues Guy has to find out exactly what happened to his mother.

This would appear to be a viable plot though not a very original one, but when it comes to delivering the story – the writing part - Harrison is in over his head.

His inexperience as a writer is heralded by his use of far too many adverbs. If you constantly need adverbs to explain how your dialogue is delivered than it’s weak and should be rewritten. Neither is dialogue enhanced by meaningless actions being attached to it.

Explaining is another demonstration of Harrison’s lack of craft. He does too much of it and it slows the plot. Many of the details he includes aren’t necessary or would be better left to the reader’s imagination. Long explanations delivered by his characters sound unnatural and didactic.

Because of this lack of sophistication the writing lacks verve, and edge.

The author also stumbles with the plot.

Guy’s anger isn’t realistic. At three years old he would have no idea about the circumstances surrounding his mother’s death. Why would he grow up blaming his father?

Gina’s relationship with Guy crosses professional lines and the motivation is weak for her to take such risks.

Guy’s visions of his dead mother and her messages to him from beyond the grave stretch the suspension of disbelieve unless he’s having psychotic episodes. Is Guy psychotic? Evidently not.

Harrison does show promise in the way he’s structured the novel. He begins with the incident that is the catalyst and sets the story in motion fifteen years previously. He then jumps to the present. This works well as do the flashbacks of Guy’s mother’s experience in combat, while her son is searching for details of what actually happened to her.

But again this to seems a bit beyond Harrison’s ability as a writer with his portrayal of clichéd, one-dimensional bad guys and the inexplicable rescue of Imogen by the person she was sent to save.

All of these weaknesses can be, and hopefully will be, overcome in time by practice.
Writing is a craft and the more you write the better you get.

I received this novel free from SMASHWORDS as part of my commitment to review the work of independently published authors.

This review will eventually be posted as a video on NOT YOUR FAMILY, NOT YOUR FRIEND BOOK REVIEWS at
https://www.youtube.com/channel/UCH45n8K4BVmT248LBTpfARQ

You have subscribed to alerts for paul harrison.

You have been added to paul harrison's favorite list.

You can also sign-up to receive email notifications whenever paul harrison releases a new book.