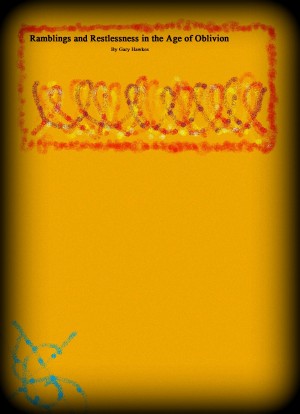 Ramblings and Restlessness in the Age of Oblivion

By Gary Hawkes
A collection of modern poems and songs touching on a variety of feelings and topics including Love, Truth and Honor. More
Various poems and songs about the modern era. Some happy, some sad, some just...various experiences I've had.

Gary Hawkes spent most of his child hood years on Whidbey Island in western Washington, aside from three years spent in Japan during his mother and step-father's Navy deployment. The experience of living in Japan and calling that country home and then moving back to the U.S., had quite the effect on the young aspiring writer; a unique perspective on what it means to be an American.
Early on however, Gary's interests were mostly in music and sports. It was periodic encouragements from family and specifically a high school teacher that spurred Gary to pursue writing more diligently later on. Most of the writer's early work were simple short stories and some poetry.
Several years after graduating college he published his first collection of poems and followed quickly after with several more books of poetry and short stories. Currently living in Washington State.

You have subscribed to alerts for Gary Hawkes.

You have been added to Gary Hawkes's favorite list.

You can also sign-up to receive email notifications whenever Gary Hawkes releases a new book.