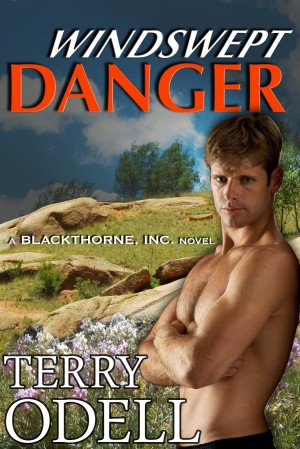 Can a feisty secu­rity agent who hates tak­ing orders and a covert ops spe­cial­ist who has some­thing to prove, put aside their own dif­fer­ences and their own agen­das long enough to uncover the secrets of Windswept Heights? More
The Stepford Wives meet Hotel California

Can a feisty secu­rity agent who hates tak­ing orders and a covert ops spe­cial­ist who has some­thing to prove, put aside their own dif­fer­ences and their own agen­das long enough to uncover the secrets of Windswept Heights?

Black­thorne, Inc. medic Glenn “Hot­shot” McCade itches to get away from what he con­sid­ers milk run assign­ments after being injured on a pre­vi­ous op. Does the boss think Hot­shot can’t pull his weight on a real mis­sion any­more? What are a few night­mares? Noth­ing he can’t han­dle. Aches and pains? He’s had worse. When he’s given an “eyes-on” only mis­sion, and paired with a woman—a part-timer who works Secu­rity, not Covert Ops—he wor­ries that his future with Black­thorne, Inc. is on the line. Is she there to eval­u­ate his per­for­mance? The mis­sion? Sim­ple. Locate a woman, believed to be at a super-private com­pound for the rich and famous, and report back. Noth­ing more. His cover? Pre­tend to be a filthy-rich, arro­gant adven­turer and infil­trate the com­pound. But inside the mys­te­ri­ous Windswept Heights, he finds a lot more than his tar­get. Should he stick to the rules, or fol­low his gut?

Olivia Fair­banks is con­tent with her two part-time jobs. She’s a Physician’s Assis­tant in an all-female prac­tice, and works Secu­rity for Black­thorne, Inc. After grow­ing up forced to believe her only func­tion in life is to be the sub­servient wife of a rancher or farmer, she’s finally rec­og­nized she’s any man’s equal. When Mr. Black­thorne sum­mons her for a new assign­ment, she’s sur­prised to find it’s a Covert Ops job, albeit a sim­ple one. Her role is to mas­quer­ade as an assis­tant to one of the Black­thorne Covert Ops team mem­bers, but she reminds her­self that she’s second-fiddle to him only for the pur­pose of this assign­ment. It’s her cover, not her life. Still, old feel­ings of resent­ment and inad­e­quacy sur­face. Before long, their sim­ple mis­sion turns into some­thing far more com­plex, and with much dead­lier con­se­quences. Will she con­vince Hot­shot McCade to accept her as his part­ner? And can she deal with the roman­tic feel­ings spring­ing up between them?

Watch as things heat up in this sixth book in Terry Odell’s pop­u­lar Black­thorne, Inc. action adven­ture romance series. Hot­shot, the team medic, is paired with Olivia, whom read­ers might remem­ber from Dan­ger in Deer Ridge. The action will leave you as breath­less as the high-altitude Rocky Moun­tain set­ting.

Terry Odell began writing by mistake, when her son mentioned a television show and she thought she'd be a good mom and watch it so they'd have common ground for discussions.

Little did she know she would enter the world of writing, first via fanfiction, then through internet groups, and finally with groups with real, live partners. Her first publications were short stories, but she found more freedom in longer works and began what she thought was a mystery. Her daughters told her it was a romance so she began learning more about the genre and craft. She belongs to both the Romance Writers of America and Mystery Writers of America.

Now a multi-published, award winning author, Terry resides with her husband in the mountains of Colorado.

You have subscribed to alerts for Terry Odell.

You have been added to Terry Odell's favorite list.

You can also sign-up to receive email notifications whenever Terry Odell releases a new book.