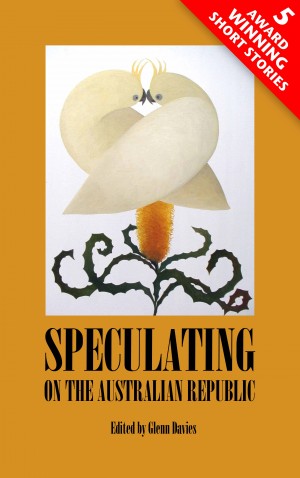 These five award-winning short stories show it is through speculative fiction that change can begin to how we see ourselves as a nation - now and into the future.

'Rook Feast' by Kel Robertson tells the story of the final meeting between the King of England, who is under house arrest, and a minister of the British government. The minister (who is also a relative) has come to inform the last King of England “on a perfect English spring day” what is to be his fate.

'Inauguration Day' by Sean Ness tells the story of James Hapeta, an Australian Federal Police Lieutenant assigned to Presidential protection detail with the Inauguration Day Presidential parade. As the Presidential motorcade travels through the streets of Canberra, Hapeta and his security colleagues attention to security is at fever pitch due to a discovered credible threat.

'The King and Mister Crow' by RPL Johnson has the future King William V reflecting on the theme of citizen or subject and issues of individuality and Australian independence while he lays injured in a plane crash in the Australian outback.

'The Harvest' by Jennifer Morris explores the theme of defining national identity with its excellent evocation of the country town atmosphere as well as descriptions of the vegetable garden and its connections with a sense of home.

'When the Ice Melts' by Ingle Knight with its quietly satirical edge connects the climate change controversy with discussion of euthanasia and dilemmas in the republican debate.

The National Republican Short Story Competition was established in 2009 to encourage the writing of speculative fiction where the story unfolds in an Australian republican future. These speculative short stories didn't have to be political thrillers or constitutional whodunits as long as they explored our future, our republican future.

The Australian Republican Movement is a non-profit organisation that advocates for an Australian republic within the Commonwealth. Becoming a republic means we will complete our journey to full and easily recognisable independence and maturity as a nation. A republic simply means having an Australian as our Head of State, not a hereditary monarch from another country. All of our national institutions would then be in Australian hands. In the 1990s most Australians wanted to make the move to a republic but were divided on how to best select the Head of State, and in the absence of a proper process to resolve those differences, the referendum in 1999 was narrowly defeated nationwide 54.87% to 45.13%. An Australian republic is about our identity – the way we see ourselves and the way we want to be seen. A republic will better reflect our values of hard work and a fair go for all. The Australian Republican Movement wants to bring Australians together around what defines us and unites us. So, let’s speculate about us, our country – and the future we will share, together.
Download: epub mobi (Kindle) pdf more Online Reader
rtf lrf pdb txt
Price: Free! USD
Add to Library
Create Widget
Tags: politics president future indigenous australia short story anthology speculative republic prince william referendum
About Glenn Davies

In any spare time, which seems increasingly rare, he is an occasional science fiction writer and reviewer, and has been an Aurealis Award Science Fiction Short Story Judge. He believes strongly in the epithet ‘publish or perish’ – no matter how constant and demanding the teaching load, it is vital, as historians, to be writing.

Glenn was raised and educated in the north Queensland goldfield community of Charters Towers. He has taught political science at Illinois State University, history at Central Queensland University, and history education at Australian Catholic University. Glenn has been studying the republican debate in Australia for 30 years. He received his PhD in 2005 from University of New England on the history of Australian republicanism, and has written academic articles and national curriculum project units on Australian history.

Glenn was the editor of the long-running Queensland ARM quarterly newsletter, Armlet, and the bi-montly national Republican Roundup. He now edits the monthly national Campaign Update. In 2009 he established the annual National Republican Short Story Competition. He is also the history editor and a regular columnist for Independent Australia and blogs monthly on republican issues. In 2015 he was awarded 'Australian Republican of the Year'.

Glenn lives in northern Brisbane with his beautiful wife and two gorgeous kids, a haughty cat, and a King Charles Cavalier who has recently agreed to renounce the monarchy and accept his republican family’s ways.

You have subscribed to alerts for Glenn Davies.

You have been added to Glenn Davies's favorite list.

You can also sign-up to receive email notifications whenever Glenn Davies releases a new book.