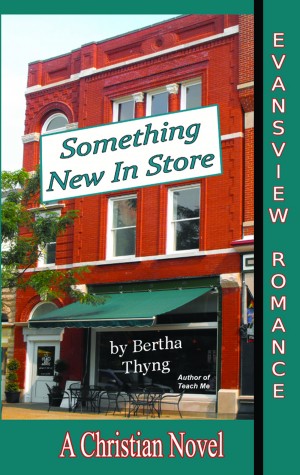 Something New In Store

Bertha Thyng was born and raised in Versailles, Missouri. She grew up on a farm northwest of town and spent her days riding horses, walking and playing in the woods and (more often than anything else) reading and writing.
One of five children still at home, there was always something going on somewhere on the farm. Whenever possible, she liked to crawl out of her bedroom window onto a lower roof on the back side of their two-story farmhouse. While there, soaking up sunshine, she would read and write.
She later served as a newspaper editor in Central Missouri, did some freelance work for various magazines and newspapers, as well as providing editing and ghost writing services privately.
In addition to being a mother of five, one of her greatest joys now is spending time with her grandchildren. She resides in Gravois Mills, Missouri, and she attends Lake Hills Community Church in Greenview, Missouri. She is married to Roger Thyng of Camdenton, Missiouri.

You have subscribed to alerts for Bertha Thyng.

You have been added to Bertha Thyng's favorite list.

You can also sign-up to receive email notifications whenever Bertha Thyng releases a new book.