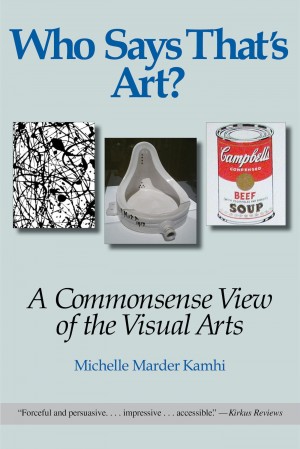 Who Says That's Art? A Commonsense View of the Visual Arts

Museums and galleries around the world are filled with "cutting-edge" contemporary work that art lovers largely detest, while painters and sculptors whose art the public would appreciate are ignored by the cultural establishment.

How did this happen? What mistaken ideas have led to it? Who is responsible? And what can be done to reverse the situation? Who Says That's Art? answers such questions—in commonsense terms that non-specialists can readily understand.

Many books have attempted to bridge the gap between the public and the contemporary artworld. What makes this book different? Other writers claim that people need to know the theories behind "advanced" work in order to appreciate it. Who Says That's Art? debunks those theories. Moreover, it reveals the cultural forces that collude to promote pseudo art in the contemporary artworld—from art educators and wealthy collectors to museum administrators and the media.

Drawing on evidence ranging from cognitive science to cross-cultural studies, the book explains how and why the traditional arts of painting and sculpture profoundly move us. In contrast, it demonstrates the emptiness of the "installations" and "conceptual art" that dominate the postmodernist artworld. Further, it documents the shallowness of the collectors who pay huge sums for works of contemporary "art" such as a shark in a tank of formaldehyde. Surprisingly, however, the author—unlike most conservative critics—argues that the breakdown of the visual arts actually began with the invention of "abstract art" in the early twentieth century, because it rendered art unintelligible.

In conclusion, Who Says That's Art? highlights the pleasures and rewards of genuine art, both old and new, and suggests how to restore sanity to the contemporary artworld.

Michelle Marder Kamhi is an independent scholar and critic and co-editor of Aristos (an online review of the arts). She is the author of Who Says That’s Art? A Commonsense View of the Visual Arts—lauded by Kirkus Reviews as “forceful and persuasive.” About her latest book (Bucking the Artworld Tide: Reflections on Art, Pseudo Art, Art Education & Theory), Kirkus writes: "solidly argued. . . eloquent . . . thought-provoking and often enjoyable. An illuminating, strongly opinionated, and enthusiastically acerbic critique of today’s art world.”

Kamhi previously co-authored What Art Is: The Esthetic Theory of Ayn Rand (Open Court, 2000), book dealt with all the major arts and was praised by Choice magazine for its “well-documented . . . debunking of twentieth-century art . . . and art theory.” The Art Book (published by the British Association of Art Historians) called What Art Is a “balanced critical assessment of Rand’s idiosyncratic arguments.” The book was also lauded for its “breadth and depth” by the eminent cultural historian Jacques Barzun.

After graduating from Barnard College, Kamhi earned an M.A. in Art History at Hunter College of the City University of New York. Before joining Aristos in 1984, she had been an editor at Columbia University Press--where she worked on titles in its distinguished Records of Civilization series--and was active as a freelance writer and editor.

You have subscribed to alerts for Michelle Marder Kamhi.

You have been added to Michelle Marder Kamhi's favorite list.

You can also sign-up to receive email notifications whenever Michelle Marder Kamhi releases a new book.