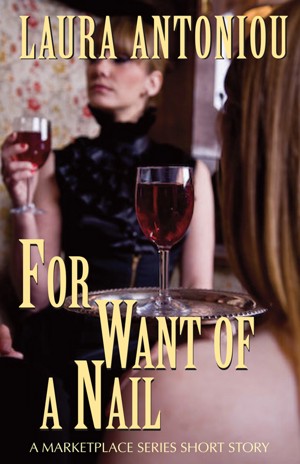 For Want of a Nail: A Marketplace Short Story

At the Long Island mansion where elite slaves of The Marketplace are trained to serve the masters and mistresses of the world with impeccable grace, Grendel and Alexandra are hosting a dinner party. Their latest trainees--as well as the patience and resourcefulness of their majordomo Chris Parker--will be put to the test. Originally published as a "bonus story" in the Luster Editions ebook. More
The ambulance pulled away at two, just as the glazier arrived. Chris could see them both through the window as he waited on hold. Thunder crashed; it was technically too early for a Nor’easter, but water spouts had been spotted off the north shore, and out of a sunny afternoon a deepening gray sky had grown and harsh winds shook the pin oaks on the front lawns. In retrospect, he thought, perhaps this wasn’t the best day for a party...

So begins a comic descent into farce as each thing that goes wrong for Chris Parker, Brian, and the slaves and staff, begets new complications.

Reviews of For Want of a Nail: A Marketplace Short Story by Laura Antoniou

You have subscribed to alerts for Laura Antoniou.

You have been added to Laura Antoniou's favorite list.

You can also sign-up to receive email notifications whenever Laura Antoniou releases a new book.