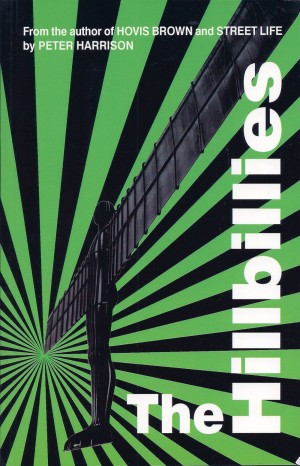 By Peter Harrison
The year is 1960. The Hill Family: Adam, Rebecca and son Charlie are all battling their own private demons; surviving - existing - in the wild and wonderful North-East of England.
Two topsy-turvy years in the turbulent lives of the family, culminating in the inevitable, unreliable confessional that threatens to destroy all three lives. More
This ebook is based on the original paperback but has been put back to the 1960s and amended slightly.

The year is 1960. The Hill Family: Adam, Rebecca and son Charlie are all battling their own private demons; surviving - existing - in the wild and wonderful North-East of England.

Rebecca, an alcoholic with morals of an alley-cat, still festers over a long-ago broken romance with the local gigolo, Jimmy Shannon, and carries a dreadful secret about her violent, miscreant teenage son, Charlie.

Adam, a typical collier; hard-working, hard drinking and brutal, especially towards his wayward, criminal son, spends most of his married life trying to suppress the self-destruct button because of the antics of his emotional, erratic spouse.

Charlie Hill, out of control in his final year at school is a bully, a thief and an arsonist who works on a regular basis for local gangster Elvis Priestley. Upon leaving school he manages to secure employment at the local colliery even though the industry is dead on its feet.

Two topsy-turvy years in the turbulent lives of the family, culminating in the inevitable, unreliable confessional that threatens to destroy all three lives.

Peter Harrison was born on 8 November 1946, left school at 15 and worked at the local colliery Easington).
At 18 Peter was living in Southhall, West London working in a tyre warehouse (offshoot of Firestone) general warehouse work, forklift driver etc. He then returned to the North East and worked at the local Water Company.
It was there (middle of winter, digging ditches in the snow) when an old school friend of Peter’s drove past bipping his horn and waving at him. He was driving a Mercedes! Peter had helped this same lad at school (he was a bit slow). It got Peter thinking ... "I`m digging holes in the snow; he`s driving a posh car."
Peter was in his twenties and going nowhere. He started studying (didn`t tell anyone because he thought he would have been laughed at.) A year later he scrapped 3 O levels. The next year, another 3. Peter was lucky to be accepted on a three year course at Durham.
While he was studying to be a teacher he took A levels. When he finally started teaching he took a BSc part time, followed by a MA, Peter ended his days as a Head of Dept, at Shotton Hall Comp School.
In the meantime he decided to spread his wings and brought a fish and chip shop ... He did rather well, 10 years later he had 6 shops.
Peter always wanted to write (so much to write about) ... he left home at 16, had several years in different lodging houses ... many different jobs ... had met so many people and so had lots of material.
Peter describes himself as a wild young man ... By 14 he was covered in tattoos from his finger tips to his chest. Months before starting collage he had 3 operations on his fingers and hands to get rid of the tattoos.Whilst teaching he had worn an adapted armband around his wrists to hide the tattoos on his arms.
Peter has two daughters and two ex wives. He lives in a one bed flat in Wingate. He owns numerous properties as he says "I`m a land lord ...I`m a happy chappy. "

You have subscribed to alerts for Peter Harrison.

You have been added to Peter Harrison's favorite list.

You can also sign-up to receive email notifications whenever Peter Harrison releases a new book.