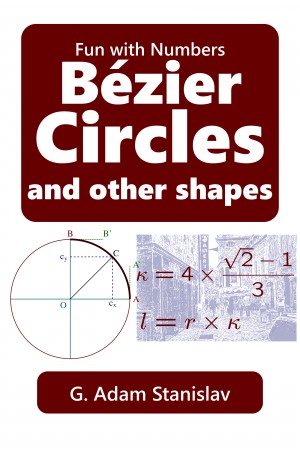 Bézier Circles and other shapes

Born 23 April 1950 in Bratislava, Stanislav was graduated in 1968 from Gymnázium Jura Hronca in Bratislava, with specialization in mathematics and computer programming. He holds graduate degrees in psychology from Komenský University in Bratislava and in canon law from Gregorian University in Rome. His writing, both fiction and non-fiction, was published in Slovakia, Czech Republic, Italy, Vatican and the United States. He has lived in Bratislava, Český Krumlov, Vienna, Rome, Washington and Pittsburgh. He is currently retired in Wisconsin. He was active in the anti-Communist underground in Czechoslovakia until he escaped to Austria in 1979. He became a US citizen in 1990 on the same day his home country rebelled against Communism in the Velvet Revolution. He enjoys visiting his beloved Bratislava as often as his financial situation and his failing health permit.

Also in Series: Fun with Numbers

About the Series: Vector Graphics

Vector graphics are one of the two main types of computer graphics. Unlike bitmaps, vector graphics define a drawing as a series of mathematical values. They can be scaled to any size without any loss of resolution.

Reviews of Bézier Circles and other shapes by G. Adam Stanislav

You have subscribed to alerts for G. Adam Stanislav.

You have been added to G. Adam Stanislav's favorite list.

You can also sign-up to receive email notifications whenever G. Adam Stanislav releases a new book.