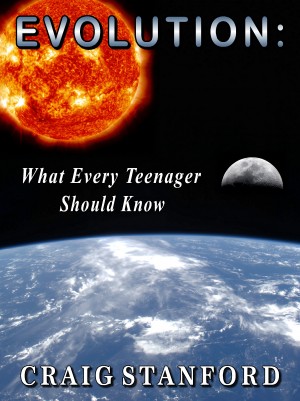 Evolution: What Every Teenager Should Know

Craig Stanford is a renowned expert on animal behavior and human origins. He is Professor of Biological Sciences and Anthropology at the University of Southern California and Director of the USC Jane Goodall Research Center. He holds a Ph.D. from UC Berkeley and is best known for his research and his books on chimpanzee hunting and meat-eating in Gombe National Park, Tanzania, done in collaboration with Jane Goodall. In addition, he spent a decade studying the relationship between chimpanzees and mountain gorillas in the Impenetrable Forest of Uganda.

Craig has conducted field research on primates and other animals for more than 20 years in Africa, Asia and Latin America. He is the author of 17 scientific and popular books and more than 130 scholarly articles on animal behavior and human evolution. His most recent nonfiction book, Planet Without Apes, was published by Harvard University Press in 2012, and describes the critical situation facing the apes in the 21st century. He is a frequent guest on radio and television interviews and is an acclaimed teacher and past winner of the USC Associate Teaching Award, the highest award given by USC for teaching excellence. He can be reached at stanford@usc.edu

You have subscribed to alerts for Craig Stanford.

You have been added to Craig Stanford's favorite list.

You can also sign-up to receive email notifications whenever Craig Stanford releases a new book.