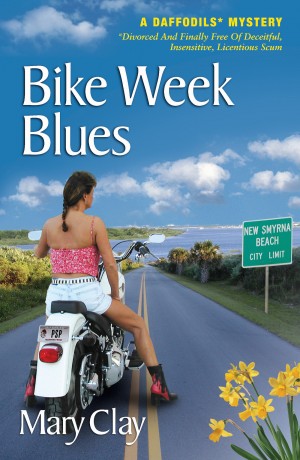 By Mary Clay
The Daffodils* Are Back!
(*Divorced And Finally Free Of Deceitful, Insensitive, Licentious Scum®)
Flamboyant Penny Sue, hot on the trail of her latest soul mate, buys a Harley and drags Leigh and Ruthie to Bike Week. No sooner do the sorority sisters reunite then all hell breaks loose. Bullets fly, a body is found and all clues point to Penny Sue's new love.

An economist by training, and a novelist by choice, Mary Clay--pen name for Linda-Tuck Jenkins, returned to her childhood love--writing--in her mid-40s. Mary Clay's comical DAFFODILS* Mystery series is set in her hometown of New Smyrna Beach, FL. (*Divorced And Finally Free of Deceitful, Insensitive, Licentious Scum TM)

Called "Witty and hilarious" by Midwest Book Review, and "A fun read" by Southern Halifax Magazine, THE TURTLE MOUND MURDER--first book in the series--is already in its fifth printing. According to Harriet Klausner, Amazon's #1 Reviewer, BIKE WEEK BLUES (second book in the series), "...is one of the funniest capers this reviewer has had the privilege of reading." MURDER IS THE PITS has been hailed as "a triumph" and MURDER IN THE STACKS "a fun read that's difficult to put down."

You have subscribed to alerts for Mary Clay.

You have been added to Mary Clay's favorite list.

You can also sign-up to receive email notifications whenever Mary Clay releases a new book.