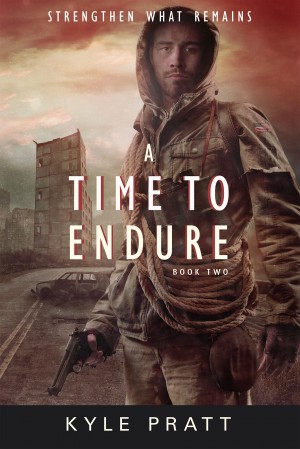 A Time to Endure

By Kyle Pratt
In the second book of the Strengthen What Remains series, A Time to Endure, the nation’s economy teeters on the verge of collapse. The dollar plunges, inflation runs rampant, and the next civil war threatens the wounded country. In the face of panic, and growing hunger, Caden Westmore struggles to keep his family and town together. But how can he save his community when the nation is collapsing? More
The exciting saga of Major Caden Westmore continues with A Time to Endure, released on December 12, 2014.

In the first book Through Many Fires: Strengthen What Remains, nuclear terrorism destroys six American cities. Caden struggles to get home across a stricken, terrified nation.

In the second book, A Time to Endure, the nation’s economy teeters on the verge of collapse. The dollar plunges, inflation runs rampant, and the next civil war threatens to decimate the wounded country. In the face of tyranny, panic, and growing hunger, Caden struggles to keep his family and town together. But how can he save his community when the nation is collapsing around it?

A Time to Endure is the second book in the Strengthen What Remains series following the bestseller, Through Many Fires.

Hello and thank you for visiting my page on Smashwords. I am a bestselling indie author of action-adventure and speculative fiction novels. Guy Kawasaki calls what I do being an “APE,” I’m a Author, Publisher and Entrepreneur.

Through Many Fires, the first book in my post-apocalyptic Strengthen What Remains series came out in paperback, Kindle and on Audible in August 2013. Within two weeks the novel appeared on the Amazon Science Fiction Post-Apocalyptic list, reaching #10, and reached #1 on the list on December 2, 2014. The second book in the series, A Time to Endure, reached the #1 position on the War fiction genre list just over a month after release and then again in January of 2016. At the same time Braving the Storms reached the #8 spot.
I grew up in the mountains of Colorado and earned an Associate in Arts degree from Mesa State College in Grand Junction. When money for college ran low I enlisted in the United States Navy as a Cryptologic Technician. I thought I would do four years and then use my veteran's benefits to go back to college.

My first assignment was with a U.S. Navy unit at the Royal Air Force base in Edzell, Scotland. While on leave in Israel I met Lorraine from Plymouth, Devon, England and married her the next year. Together we spent the remainder of my twenty year naval career traveling across the United States from Virginia to Hawaii and on to Guam, Japan and beyond.

Even before I retired from the U.S. Navy I wrote short stories. In July of 2012 my debut novel, Titan Encounter, a science fiction space adventure, came out on Kindle and later in paperback. My second book, Final Duty - The Novelette, was released in January of 2013.

Today, Lorraine and I live on a small farm in Western Washington State and you can easily find and follow me online.

If you've read one or my books and liked it, please leave a review and tell your friends. The best advertisement I could possibly get are reviews and word-of-mouth recommendations.

About the Series: Strengthen What Remains 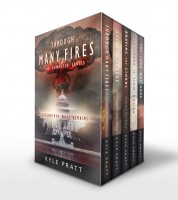 Terrorists smuggle a nuclear bomb into Washington D.C. and detonate it during the State of the Union Address. Army veteran and congressional staffer Caden Westmore is in nearby Bethesda and watches as a mushroom cloud grows over the capital. The next day, as he drives away from the still burning city, he learns that another city has been destroyed and then another. America is under siege. Panic ensues and society starts to unravel.

Also in Series: Strengthen What Remains

You have subscribed to alerts for Kyle Pratt.

You have been added to Kyle Pratt's favorite list.

You can also sign-up to receive email notifications whenever Kyle Pratt releases a new book.