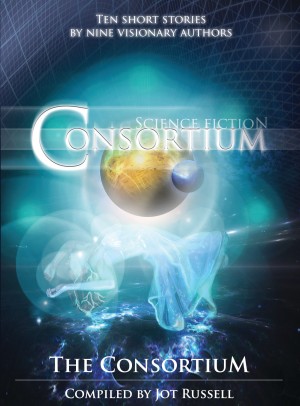 “Temporal Shift” by Jot Russell is a time travel story based around 9/11.
“The Watch Spring” by Allen H. Quintana - Where a man waits for no time.
“A Shepherd No More” by Andy McKell follows one man's refusal to accept disaster in the depths of space.
“Vampirecratic Menace - A Case Study?” by Richard Bunning describes a dark future medical science.
“Luna-1” by James Newman is a space drama of human struggle.
“The Destroyer of Syn” by Ami Hart paints a synthetic world of youth to maturity.
“Cold New Planet” by Joy V. Smith - What mysteries will the colonists--and the consortium backing them--uncover on this slowly thawing planet?
“Darklings in the Glow” by Sterren describes birth from the ashes.
“Host” by A. L. Scott is a story of internal contact.
“Consortium” by Jot Russell - The search for intelligent life has used the method of radio and light. But somewhere within the subatomic, a universal seed has been planted that is slowly working to control us all.

Jot Russell is a writer and engineer from the North Shore of Long Island. As the creator and director of the Science Fiction Microstory contest on LinkedIn's Sci-Fi group, Jot has built international recognition from fellow writers and readers alike. Among dozens of stories, his longer works include Terra Forma, Open Source Government, Temporal Shift and Consortium.

Terra Forma portrays the near future in which one man strives to unite the world through the task of creating another. The global project to terrform Mars invites danger on the founder and project workers operating asteroid tug vessels in space. This realistic view of the future could represent the birth of a new living world or the destruction of the Earth herself.

Open Source Government is a non-fictional proposal for solving a number of national and international issues through a singular and simple method.

Temporal Shift and Consortium are part of his international "Science Fiction Consortium" anthology that is now available. The lead is a time-travel story around 9/11 that walks the line between religious extremists and bigotry.

You have subscribed to alerts for Jot Russell.

You have been added to Jot Russell's favorite list.

You can also sign-up to receive email notifications whenever Jot Russell releases a new book.