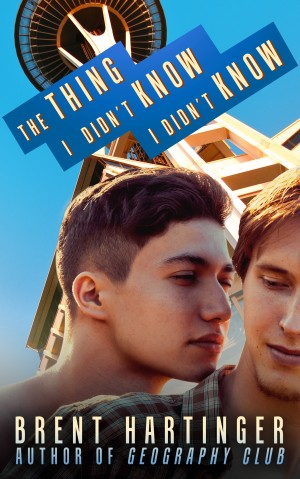 By Brent Hartinger
Rated 4.00/5 based on 2 reviews
Twenty-three-year-old Russel Middlebrook searches for the secret to gay life and love in trendy Seattle. A "new adult" novel by the author of the gay teen classic, Geography Club. More
"I guess this was what they meant by a loss of innocence. Who knew?"

Russel Middlebrook is twenty-three years old, gay, and living in trendy Seattle, but life isn't keeping up with the hype. Most of his friends have a direction in life—either ruthlessly pursuing their careers or passionately embracing their own aimlessness. But Russel is stuck in place. All he knows is that crappy jobs, horrible dates, and pointless hook-ups just aren't cutting it anymore.

What's the secret? What does everyone else know that he doesn't?

Enter Kevin, Russel's perfect high school boyfriend. Could rekindling an old flame be the thing Russel needs to get his life back on track? Or maybe the answer lies in a new friend, an eccentric screenwriter named Vernie Rose, who seems plenty wise. Or what the hell? Maybe Russel will find some answers by joining his best friend Gunnar's crazy search for the legendary Bigfoot!

One way or another, Russel is determined to learn the all-important secret to life, even if it's a thing he doesn't even know he doesn't know.

Author Brent Hartinger first made a splash writing books for teens. The Thing I Didn't Know I Didn't Know, Hartinger's first book for older readers, is just as much of a page-turner as his earlier works, with plenty of his trademark irreverent humor. But now his books have grown up along with his readers, exploring the issues of new adults, especially the complicated matter of love and sex.

“The Thing I Didn't Know I Didn't Know is a superb read! Hartinger nails the voice of a character right on the precipice of adulthood, a young man who feels lost amid a Seattle landscape full of adults who have it all figured out, peers who seem to have either unstoppable career drive or passionate aimlessness. It’s fun, moving, and real. Read it!”
– Bill Konigsberg, award-winning author of Openly Straight and Out of the Pocket

“Brent Hartinger ushers irrepressible fan favorite Russel Middlebrook into the next phase of his life with trademark wit and heart. Readers who have grown up with Russel will welcome this latest chapter in his always entertaining and frequently moving misadventures, while those meeting him for the first time will quickly find themselves with a new best friend.”
– Michael Thomas Ford, author of Last Summer and Full Circle

“The Thing I Didn’t Know I Didn’t Know is a real page turner and I laughed, I gasped, I cheered for Russel, and everything in between as I read it. Brent hits the nail on the head when describing adulthood for the new generation: how we have dreams, fears, and are lost.”
– Sensible Reason Magazine

​”Russel Middlebrook is an extremely engaging character, and I positively adored him…. For as little as Russel seems to think is going on in his life, he certainly kept me captivated with his story.”
– Swept Away by Romance

“A success — and hopefully the first of many books of its genre.”
– Gay City News

Brent Hartinger is an author, teacher, playwright, and screenwriter. Geography Club, the book in which Russel Middlebrook first appears (as a teenager), is also a successful stage play and a feature film co-starring Scott Bakula.

In 1990, Brent helped found one of the world's first gay teen support groups, in his hometown of Tacoma, Washington. In 2005, he co-founded the entertainment website AfterElton.com, which was sold to MTV/Viacom in 2006. He now lives in Seattle with his husband, Michael Jensen.

BRENT HARTINGER is a novelist and screenwriter. His twelve novels include the 2003 gay teen classic GEOGRAPHY CLUB, which was adapted as a feature film in 2013.

Nine of Brent’s screenplays have been optioned for film, and four are currently in various stages of development, including PROJECT PAY DAY, a teen caper story based on his own novel, now in post-production for a 2020 release.

Brent currently has no permanent address, and instead continuously travels the world with his husband, writer Michael Jensen. Their "digital nomad" journey, which has been featured on CBS Sunday Morning and in Forbes, is documented on their website BrentandMichaelAreGoingPlaces.com.

About the Series: Russel Middlebrook: The Futon Years

I've been following Russel Middlebrook from the very beginning back with Geography Club and this latest installment is a near seamless addition to his story.

After four books, Hartinger chose to jump Russel's story ahead so he's now in his early twenties and trying to figure out life while living in Seattle. Like the previous Russel books, the story is heartfelt without being schmaltzy, and insightful without being preachy.

I love the fact that Russel, Min, and Gunnar are all living together and all struggling the issues most of us grapple with in our early twenties. And I don't want to give anything away, but fans of Kevin will be happy see he returns in this book.

Whether you've been a fan of Russel all along or have just discovered him, The Thing I Didn't Know I Didn't Know is a great addition for gay books and fans of gay fiction.

This was one book I was looking forward to - I have known Russel since the first book, hence his return was welcome.

The problem with a book that skipped a few years of Russel's years was that it felt incomplete to begin with. What actually happened between Russel and Kevin? The narration was supposed to help but it felt more like a quick glance on the issues between them. Fans of Russel and Kevin were expected to accept the current situations they were in, without much detail.

I was expecting to read more about Russel and Kevin. However, it was disappointing to hear bits of Kevin here and there. And for the rest of the book, it was more like we had to deal with a 'lost' Russel. Kinda a downer to think that the lead of the book, who was gay, would be portrayed as someone 'lost'.

This book was missing the Kevin's part. I wanted to know what happened - between him, Russel and Colin but the book concentrated too much on Min and Gunnar, whom I was getting tired of. What the heck were they doing in the book?

You have subscribed to alerts for Brent Hartinger.

You have been added to Brent Hartinger's favorite list.

You can also sign-up to receive email notifications whenever Brent Hartinger releases a new book.