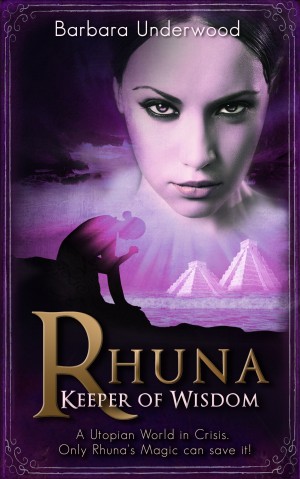 By Barbara Underwood
Rated 5.00/5 based on 1 reviews
In the distant past, when a utopian civilization built the pyramids and other megalithic structures using magical powers, a young girl named Rhuna learns the truth about her father and the enemy that caused his demise. The idyllic civilization in which she flourishes and finds love is threatened by this old nemesis, and only Rhuna possesses the special inherited skills to stop him. More
Barbara Underwood marks her debut in the world of fantasy fiction with the spellbinding novel, “Rhuna, Keeper of Wisdom” which follows the adventures of a young heroine with an extraordinary gift. It also features a cast of richly drawn characters and compelling storytelling that will rivet readers from beginning to end.

The story is set in an idyllic utopian society, not unlike the Atlantis of myth, and follows the adventures of the title character, Rhuna. A series of extraordinary events unfold after the young girl discovers the startling truth about her father and the enemy that caused his demise known as The Dark Master. As Rhuna struggles with her newfound discovery, her beloved homeland is thrust into chaos, threatened by her father’s old nemesis. In the midst of the unfolding cataclysm, Rhuna must find her extraordinary destiny and the courage to stop The Dark Master from destroying everything and everyone that she loves. Suffused with magic and menace, “Rhuna, Keeper of Wisdom” will send readers on a journey to astonishing realms, as only the most exquisite kind of fiction can do.
Available ebook formats: epub mobi pdf lrf pdb txt html
First 20% Sample: epub mobi (Kindle) lrf more Online Reader
pdb
Price: $0.99 USD
Buy Add to Library Give as a Gift
How gifting works
Create Widget
Tags: urban fantasy paranormal magic young adult atlantis
About Barbara Underwood

I want you to know that I've enjoyed this book fully. I love the character Rhuna and her adventures kept me interested throughout the book. I mostly loved her curiosity and her wanting to learn of different life styles. At times I felt sorry for her with the way people treated her.
Barbara Underwood is a wonderful author with a keen sense of dialogue and description that keeps you interested throughout her story. I would be interested in reading more from this author!