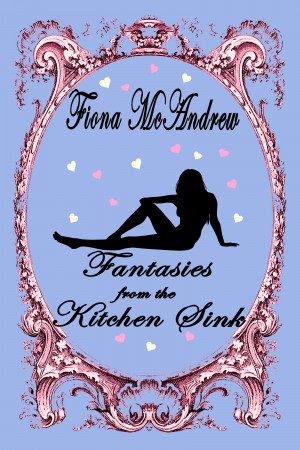 Fantasies From The Kitchen Sink

In her search for a new life of romance and respectability, Fifi finds her path crossing with sexually frustrated pensioners, and finds herself baking cakes for the Womens institute laced with Marijuana. She also teaches them how to Pole dance, and fights a battle of wills with the towns controversial book reviewer, Ted Pembleton.

On a visit to LA to stay with an old friend, Fifi is seduced by the gardener, which ends disastrously. A surprise phone call from her flamboyant gay agent Luka brings Fifi back to England for the Queens garden party, where all hell breaks loose when she discovers that some of the Dorking residents are also attending.

Fifi, not beaten, but lonely and bored, sells up and returns home to her mothers house in Gateshead. The death of a friend and a brief encounter with a long lost love brings Fifis world crashing down.

With the help of a transsexual drag artist called Elspeth, Fifi re-evaluates her life, returns to LA, and starts once again to write her next adventures.

Fiona McAndrew has led a varied and at times controversial life. Although she is now a writer, in the past she was a model who regularly appeared in the British press and on the television. She was also a life model for world famous artist Lizzie Rowe, and after her modelling career ended Fiona dedicated her life to campaigning for women with low self-esteem and body image issues. She has also been included in a book by her former doctor called “Dignity in Death”, which documented her worldwide campaign in support of him.

Away from her career Fiona is a single mother of two, and she lives in the North of England with her dogs and two hens. She is also a sufferer of Graves disease, and is always keen to lend a hand to organisations who help people with auto-immune disorders and thyroid disease.

Reviews of Fantasies From The Kitchen Sink by Fiona McAndrew

You have subscribed to alerts for Fiona McAndrew.

You have been added to Fiona McAndrew's favorite list.

You can also sign-up to receive email notifications whenever Fiona McAndrew releases a new book.