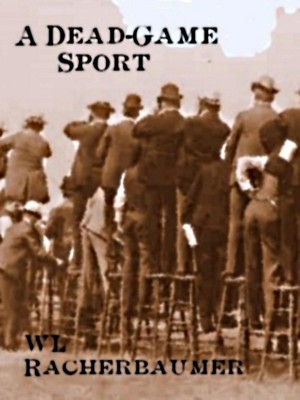 Based on the lives of Charles Riley Grannan and George “Pittsburgh Phil” Smith.
Proofed August 2014

WL Racherbaumer began writing late in life.While in his twenties, he was a musician and a journalist in the U.S.Navy. Returning to school, he earned a degree in communication after which he was an editor for a music magazine and a disc jockey. He then went into retail, which he found wanting, leading him to take a job as a reading specialist. Two decades later, he retired as a post-secondary Educational Psychologist. The one constant throughout his diverse employment was his passion for the sport of horse racing. It began in 1955 when he witnessed Nashua beat Swaps at Washington Park in Chicago. Those sixty years of experience are the mortar that built the foundation for his narrative.

Riley Grannan was a bookie. He so excelled at his craft that he could earn a fortune in an afternoon, or lose one. Eleven-year-old Dayton Shannon was the motherless son of an abusive father until his Uncle Tom agreed to teach him the ropes of bookmaking. Dayton had a natural affinity and his uncle taught him well enough that the renowned Riley Grannan hired him to assist in his betting operation. At the age of twelve Day got to travel the racing circuit, see the world and earn more in a year than in a lifetime of shining shoes at the train station.

This is the most peculiar book that I ever enjoyed. Many years ago I learned that horseracing is not only a beautiful spectacle, but it is a beautiful way to lose money. Since I shun the odds makers much of the bookmakers’ jargon was lost on me—I don’t even fully understand the title—and I can’t deny that one-hundred and twenty year old racing statistics are an arcane topic, but this story is irresistible. It is told from multiple viewpoints that at times made it hard to remember who was telling the story, and it is not conventionally edited, but none of that detracted from my enjoyment. The characters carry this tale of high stakes, fast living, corruption and redemption in the 1890’s. It is a nostalgic look at racing from the standpoint of that often-unsavory character, the bookie.

You have subscribed to alerts for WL Racherbaumer.

You have been added to WL Racherbaumer's favorite list.

You can also sign-up to receive email notifications whenever WL Racherbaumer releases a new book.