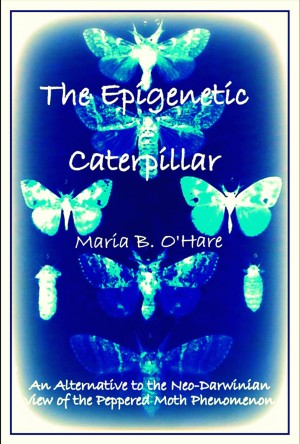 The Epigenetic Caterpillar: An Alternative to the Darwinian view of the Peppered Moth Phenomenon

By Maria B. O'Hare
Epigenetics (meaning beyond the genes) is an alternative explanation for the Neo-Darwinian version of the Peppered Moth phenomenon - the epigenetic caterpillar is a case in point. It has exactly the same genes as its adult form - a butterfly. yet, this creature having the same genes looks nothing like a flying insect. This booklet will explain why it is epigenetic. And Darwin would have agreed. More
Briefly, the Darwinian model would interpret the industrial melanism of moth as follows:
a change in color from light to dark and back again in generations of moths due to industrial smog in England in the 19th century, is classically explained as the darker colored moths had an advantage that protected them from bird predation as they possessed the most adaptable genetic variation that helped them avoid the birds (the bird is the environmental selector in this case). Darker moths were more protected in the smog conditions therefore, as birds would see the lighter colored moths better (I would just like to mention though, I'm not sure birds like moths - but I know they love juicy caterpillars) as they would stand out more against the blackened trees, thus the moths with the genetic tendency for dark color would eventually avoid most of the bird predation and after generations tended to be more dark in color, thereby outcompeting their lighter-colored moth cousins and producing more of the darker varieties.

There is, however, another scientific explanation. It is called Epigenetics (meaning beyond the genes) Take for example, a caterpillar with exactly the same genes as its adult form - a butterfly. According to the Neo-Darwinian genetic version of evolution, this creature having the same genes should look the same or at least similar. They obviously don't. A caterpillar looks nothing like a flying insect. The explanation would appear to be in their different genetic expression of the same genes, at different times and in different combinations and according to environmental cues, which is exactly the way epigenetics operates. It makes dramatic changes to the expression of genes and therefore the creature, but it doesn't change the DNA sequence itself. Metamorphosis is a classic epigenetic phenomenon.

This little booklet: The epigenetic caterpillar will therefore re-evaluate the traditional interpretation of the Peppered Moth phenomenon from an epigenetic perspective. Furthermore, Darwin himself never excluded environmental drivers of evolution (epigenetics in modern parlance) the way his later supporters did. Today, our modern synthesis has entirely banned any other way of evolutionary change, other than to say that all organism can only inherit their genes (with variation through time) directly from your ancestors. The epigentic type of evolution challenges this most fundamental tenet of our modern theory of evolution.
Available ebook formats: epub mobi pdf rtf lrf pdb txt html
First 20% Sample: epub mobi (Kindle) lrf more Online Reader
pdb
Price: $0.99 USD
Buy Add to Library Give as a Gift
How gifting works
Create Widget
Tags: epigenetics lamarck alternative evolution epigenetic evolution industrial melanism metamorphosis in insects peppered moths
About Maria B. O'Hare

Reviews of The Epigenetic Caterpillar: An Alternative to the Darwinian view of the Peppered Moth Phenomenon by Maria B. O'Hare