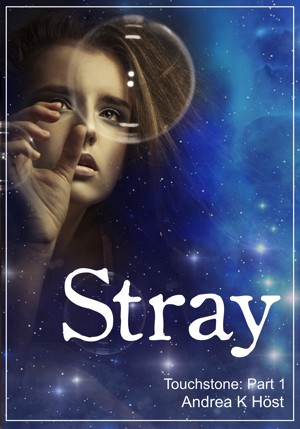 By Andrea K Höst
Rated 4.55/5 based on 20 reviews
In this planet-hopping Girl’s Own Adventure, an Aussie teen must survive a world without technology, and then another with far too much. Rescue is only the beginning of her problems. More
On her last day of high school, Cassandra Devlin walked out of exams and into a forest. Surrounded by the wrong sort of trees, and animals never featured in any nature documentary, Cass is only sure of one thing: alone, she will be lucky to survive.

The sprawl of abandoned blockish buildings Cass discovers offers her only more puzzles. Where are the people? What is the intoxicating mist which drifts off the buildings in the moonlight? And why does she feel like she's being watched?

Increasingly unnerved, Cass is overjoyed at the arrival of the formidable Setari. Whisked to a world as technologically advanced as the first was primitive, where nanotech computers are grown inside people's skulls, and few have any interest in venturing outside the enormous whitestone cities, Cass finds herself processed as a 'stray', a refugee displaced by the gates torn between worlds. Struggling with an unfamiliar language and culture, she must adapt to virtual classrooms, friends who can teleport, and the ingrained attitude that strays are backward and slow.

About the Series: Touchstone

I was intrigued by the description so despite not reading very much fiction decided to give it a try. I found it a bit slow BUT even with that I identified with the main character. Overall an enjoyable read and I am rather curious as to what happens next.

I must confess I was surprised by her decision near the end. It seemed too mature for the character. I don't want to include spoilers but I honestly expected her to jump on the offer, consequences be hanged. Of course, in this case there WOULD have been repercussions, which the character pointed out later.

I'm giving it four stars because I did feel it was a bit slow and I thought she was OOC at that one point. In all fairness I must admit I read through to the end and am considering the purchase of Book #2. I can't say that about many novels.

Very nice sci-fi fantasy story about a teenage Australian named Cassandra, that while walking home turns a corner and ends up on another world. Well written and funny. Done in a diary form it was an excellent way to spend an afternoon in the sun.

It was a nice change reading a SFF adventure without cookie cutter YA roles and relationships. Kudos on the strong, smart, and resourceful heroine Cass. I kind of didn’t like the journal style at the beginning, but it really did become less conspicuous and more engaging as the story progressed. A lot of the book read like an anthropological ethnography of another culture, which was pretty cool, but at times could be a little encumbered with descriptions.
I really liked the nerdy references peppered throughout the book (e.g. Stargate, computer games and gaming analogies, etc.). It was an imaginative book; a fun and intriguing sci-fi universe the author created. By the end, I was ready for the next book. I won this eBook through a LibraryThing member giveaway.

(reviewed 6 months after purchase)
Nicole reviewed on Jan. 8, 2012
(no rating)
It was a nice change reading a SFF adventure without cookie cutter YA roles and relationships. Kudos on the strong, smart, and resourceful heroine Cass. I kind of didn’t like the journal style at the beginning, but it really did become less conspicuous and more engaging as the story progressed. A lot of the book read like an anthropological ethnography of another culture, which was pretty cool, but at times could be a little encumbered with descriptions.
I really liked the nerdy references peppered throughout the book (e.g. Stargate, computer games and gaming analogies, etc.). It was an imaginative book; a fun and intriguing sci-fi universe the author created. By the end, I was ready for the next book. I won this eBook through a LibraryThing member giveaway.

A thoroughly enjoyable novel, in a "I can't put this down until the end" way. A truly original and refreshing perspective, The characters, especially Cassandra, have a lot of depth and are suitably intriguing. I really felt for them and was moved almost to tears at one point. A truly amazing sci-fi/fantasy novel that I highly recommend!

different than most books i read. unique style and creative world(s). i hope you enjoy it as much as i have.

(reviewed 21 days after purchase)
Madelyn Bader-DeWitt reviewed on Nov. 17, 2011
(no rating)
I thought this looked interesting. Cassandra's diary covers her unwanted adventure into a new world and universe when she inadvertently walks through an invisible 'worm-hole' into another world. I enjoyed this book thoroughly, because the young lady in question was intelligent yet rather ordinary. There were no 'magic' know-how fixes or instant knowledge. Everything that she did had consequences, including things done to her. The society in which she finds herself, and how she deals with the issue of being a 'stray' in her new world are quite realistic and reasonable.
I'm looking forward to the next volume, and will probably purchase all three once they're available, for my granddaughters.

‘Stray’ is the first volume of the three-part diary of high school student Cassandra Devlin, who stepped through a wormhole to an alien world and became friends with psychic ninjas saving the universe from interdimensional ghosts. That’s the gist of it anyway, though a short synopsis does no service whatsoever to this charming science fiction adventure. YA reader-friendly, ‘Stray’ is partly an exploration of the tribulations of the refugee and partly a good old-fashioned superhero story, albeit told from the point of view of the underpowered kid sidekick.

Cazsandra, as the aliens call her, proves herself more useful than expected to the youthful Setari (the psychic science-ninjas with cybernetic telepathy). Cass is a clever and resourceful protagonist, but she’s also lazy, often homesick and occasionally lacking in common sense (The cat! The cat!). Her struggles - to adapt to her new surroundings, to learn the local language and customs and to cope with being cooped up and monitored for science - are fascinating. Her realisation of what it will cost her to get back home is tragic.

‘Stray’ is written as a series of diary entries covering the first five months of Cassandra’s journey. The diary format may not work for some but I found it helped to have the complexity of the setting and the small army of supporting characters parcelled out into digestible chunks. As a narrative device it also provides some distance for both Cass and the reader from the more traumatic aspects of her plight, making it a lighter and more accessible read than the homesickness misery trap other stranger-in-a-strange-land stories sometimes fall into. Highly recommended.

I loved this book. It is one of the best Sci-Fi novels I've read in ages, and I love Sci-Fi. HIGHLY recommended!!!!

Honestly I expected something different going into this book. I hadn't read any reviews, as I had enjoyed Host's fantasy Champion of the Rose (which when I think about it had a lot of science fiction elements, just as this had a lot of fantasy elements) and had won this in a giveaway besides. Told in diary format, which one of my least favorite formats, This Cassandra's journey from November to March and is the first in a trilogy.

Part of why I enjoyed this book so much is that its one of my favorite plot devices (ordinary girl shuttled off to an unusual world where she finds out she's special) while at the same time Cassandra was immediately relatable for me. Cassandra isn't extraordinarily gifted in any way, not athletic or a outdoorsy survivalist or terribly crafty. She is extremely resourceful, knows how to make years of pop culture work to her advantage and maintains an appropriately sarcastic level of commentary throughout her diary entries.

I'll fully admit that if Cass hadn't grown on me I wouldn't have finished this book. Diary style books tends to make me feel like its just one huge info-dump (which in ways it is) and as a reader we never actually experience anything. Even as later on Cass finds it easier to relay conversations and events, we were getting everything second hand. Its hard to feel immersed in a world like that. Cass was engaging, that's the only way I can describe her. She admits her faults (at one point she tells her diary that she cuts out all the hysterical crying and sobbing she does during the day since that would make for boring reading wouldn't it?), but remains practical about what she can get done.

The world of Muina, and later Tare, that Cass winds up in is like our world but not really. There's a higher focus on psychic abilities--with a definitive break in society between those who are 'elite' (the Setari) and those who are not (everyone else). The Setari spend much of their lives training to become as perfect as possible in order to protect everyone from the Ionoth (monsters) and are regarded as super stars. I found the entire civilization rather fascinating, though its rather rigid and militaristic (with I suppose good reason) and I wouldn't have fared half as well as Cass I don't think.

Host sets a good pace throughout the novel, giving us plenty of time to see 'Survivor-Cass' and then 'Lab Rat Cass'. We read about a lot of day-to-day activities, which get kind of repetitive after a while interspersed with learning new things about Tare and Cass. It seems like an awful lot happens to Cass in the 5 or so months she's gone from Earth, but to put it in perspective the Taren years is only 4 months long, their equation of time is slightly off from ours.

Unfortunately we see very little of the world outside of the Setari stronghold. Cass' early wanderings before the government takes a keen interest in her don't last long and her brief excursions to go shopping are pretty unremarkable overall. I would like to know more about their culture, but with the developments in the latter third that seems unlikely.

Overall this made me eager for the next book, Lab Rat One and excited for the third book, Caszandra coming this December.