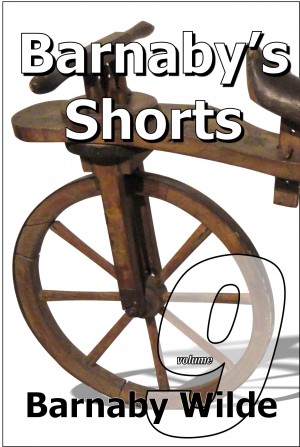 Barnaby Wilde is the pen name of Tim Fisher.
Tim was born in 1947 in Hertfordshire, United Kingdom, but grew up and was educated in the West Country. He graduated with a Physics degree in 1969 and worked in manufacturing and quality control for a multinational photographic company for 30 years before taking an early retirement to pursue other interests. He has two grown up children and currently lives happily in Devon.

A few months ago, I started trolling Google and various websites for coupon codes to books on Smashwords. This is, I think, how I obtained this copy of Barnaby's Shorts (Volume Nine) By Barnaby Wilde. It's only fair that I give an honest review in return for getting the opportunity to read it. I started reading the book soon after. It's essentially a book comprised of several short stories. Being that it's various short stories, I don't particularly know what I ought to rate this, but I'll try to explain my feelings on the matter soon enough.

"The Dandy Horse" is about a group of people who discuss bikes. I didn't particularly like this short story; I kind of felt it was a little bit dull and the punchline relied on a joke I didn't find to be funny.

"The Man Who Wasn't There" is about a police officer looking into the disappearance of Stanley Northbridge. It was an alright story. Overall, I guess I kind of liked it as it had a vague mystery to it. However, the ending was not completely explained.

"The Bo" is simply described on the contents page as "the coming of the rainy season" which I don't think to be a fully appropriate description. It's not exactly explained in the beginning of the story, so my best guess at that point was that they were extremely stupid people who seemed to just point and grunt rather than communicating properly. It took some time to realise that they were some sort of version of cavemen (and women). I didn't like it; I just didn't find it interesting.

"The Problem with Beans" features a woman, Emily, who seems to have had prior experience in these types of novels. In this short story, she finds a real man. I thought this story to be kind of interesting and kind of sweet at the end. I think I would like to read more of her adventures, I guess.

"Visitors" is about alien visitors. I didn't particularly find it interesting.

"Wheels" is about a man in a wheel chair who looks back on how important wheels have been to him in his life. I thought this to be dull.

"Davey's Field" is a story about a man who has ruins in his field and uses them to his advantage. This story had an interesting premise and I think that I could have liked it if it were written differently. Though, I honestly found this story to be more annoying than interesting in this case. The main character has some sort of accent and because the author has chosen to feature this accent as part of the plot, it becomes kind of distracting to read. I had to stop every few moments to try and figure out what had been said.

"300 Things a Boy Can Do" is a book written by a young boy who hopes to encourage other boys to do (dangerous) things in their lives. I think this is another one that has an interesting premise. Though, the way it was written didn't particularly appeal to me.

"Whichcraft" is about a janitor who spies the goings on in a secret laboratory. Again, this is another one with an interesting premise. I think that this storyline might have appeared in prior short story books by the same author (though I don't know for sure). I think it would be interesting to start from the beginning. It's interesting, but starting from some sort of mid-way, I don't get all the information.

"Ripple" is a tale about a couple who notice several ghosts in their home. I thought this story to be somewhat interesting. It's quite an original plot with some sort of scientific basis. It's difficult to explain without going too much into it. However, I thought it was a great story.

Overall, I liked two of the stories very much. I sort of liked a further two. As for the other six, I guess they weren't to my taste. They aren't terrible stories. They were written reasonably well and I can see how some people might like them. However, they just weren't for me. My overall rating, being that I didn't like more than half of the stories, woud be a two star. However, since I thought other stories were pretty brilliant, I'll knock it a star higher because the two stories I did really like kind of redeems the book. If given the chance, I guess I would like to read more from the author. They clearly have eclectic tastes in writing, being that many of the stories have varying genres, and I think I might like more of their work.

Another great collection. Wilde's wit, imagination, and creative intelligence provide laughter, perspective, and points to ponder. There is something here for everyone. The dialog is snappy, and the narration is clear. Choosing a favorite would be difficult. It might be "300 Things a Boy Can Do." They're all good.

As expected, an excellent collection of short stories that will leave you, in turns, feeling nostalgic, puzzled, delighted, sometimes even baffled, and always happy to have taken the time to indulge in a good read!

You have subscribed to alerts for Barnaby Wilde.

You have been added to Barnaby Wilde's favorite list.

You can also sign-up to receive email notifications whenever Barnaby Wilde releases a new book.