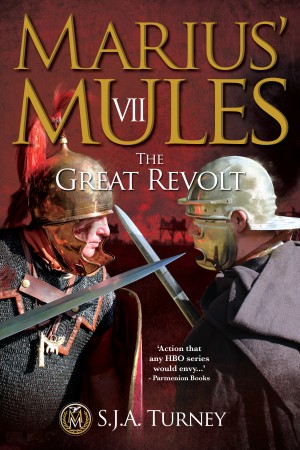 Meanwhile, Caesar tends to business in Aquileia, unaware that he is cut off from the bulk of his army in the north by the rebellion. A desperate message brought to Fronto at Massilia spurs the forces of Rome into movement and Caesar is compelled to act in cunning and unexpected ways in order to recover the initiative.

Fronto and his friends are heading for a clash of armies the likes of which the north has never seen, and the Tenth's legate is about to face his most trying year yet facing his opposite number - a chieftain of the Arverni - across the fields and hills of Gaul towards the greatest siege he's ever experienced: Alesia.

It's 52 BC, and this annual campaigning season starts months early. The Roman spies are correct, the Gauls are on the move, and they've proved their intention to remove Roman influence from their land forcefully, by destroying the Roman supply depot at Cenebum, and slaughtering all Romans. (See Marius' Mules Prelude to War)
Book 7 in the Marius' Mules series of books from Simon James Atkinson Turney doesn't disappoint. The story and action are non-stop; at no point does do they lag, or make me feel that I want to take a breather, which REALLY made it difficult when Morpheus beckoned! There's even a proper baddy just ripe for disliking, and a new character to like. For once we get to see Caesar less than sure of the outcome of a particular battle, and I have to wonder what would have happened if things had fallen out the other way.
I like the addition of the pictures of the Dramatis Personae at the beginning of the book, though I really would have liked diagrams of the pertinent battlefields, and perhaps a map of the travels of the respective armies, but then, I'm in the habit of googling durn near everything anyway, so in the end it really didn't matter.
If you haven't started the series, I envy you, because you have days of enjoyable reading ahead of you. I can't imagine that anyone who has read this far in the series would be hesitating about buying and reading this book. Do it, you know you want to!