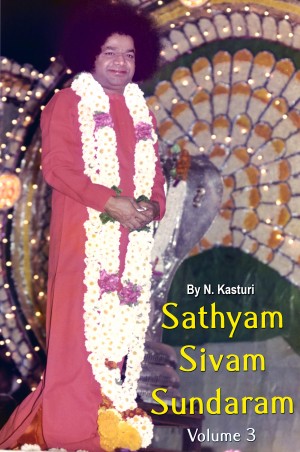 By N Kasturi
This third volume of “Sathyam Sivam Sundaram” narrates the life history of Bhagawan Sri Sathya Sai Baba, covering the period 1969 to 1972. More
“Know Me as the Teacher of Truth, Sathyam Sivam Sundaram” Bhagawan Sri Sathya Sai Baba has said. Chronicled by Professor N. Kasturi, the biographer of the Avatar of the Age, this third volume of Sathyam Sivam Sundaram, depicting the Divine life covering the period from 1969 to 1972, highlights a variety of epoch making events, such as the inauguration of Dharmakshetra in Mumbai, in May, 1968, by Bhagawan, after it was built in an incredible hundred and eight days of dedicated work, the first World Conference and the historic public meeting addressed by Bhagawan at Mumbai, in which the then Deputy Prime Minister of India, Sri Morarji Desai took part, and the miraculous cure of Kulapathi Dr. K. M. Munshi from Parkinson’s disease by Baba, as narrated by Dr. Munshi himself.

The Divine tour of Africa is unique in its portrayal, as the biographer takes the readers virtually along with him, with his beautiful narration. The establishment of the college for women at Anantapur, for the uplift of women, by Bhagawan in June, 1966, the manifestation of jyotir linga, which lay hidden at the Somanath Temple in Sourashtra, curing a strange malady, with which the doctors of Dibrugarh were afflicted, and the installation of Shirdi idol at Guindy, Chennai are some of the many Divine leelas narrated by the author in his own inimitable style.
Available ebook formats: epub pdf lrf pdb html
First 20% Sample: epub lrf pdb Online Reader
Price: $5.00 USD
Buy Add to Library Give as a Gift
How gifting works
Create Widget
Tags: bhagawan bhagavan bagawan bagavan professor prof n kasturi kasthuri casturi casthuri sathya satya sai baba swami life story miracles incidents experiences puttaparthi prasanthi nilayam prashanthi ashram township satyam sivam sundaram sathyam shivam sundaram biography biographer volume 3 1969 1972 years
About N Kasturi