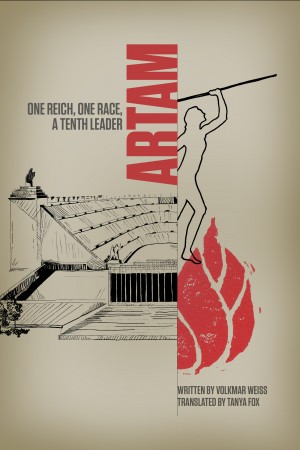 Artam: One Reich, One Race, a Tenth Leader

By 2050, Old Europe and much of the world were wallowing in the Great Chaos. After peaking at 9 billion, the world’s population dropped to 2 billion. But now in 2084, flourishing in the East with its capital city of Reichsburg (formerly Kiev), is the new Reich, Artam, where generations of genetic selection have created a new human race.

This elite race, with its Black Corps, has separated itself from the rest of the population, living a life of excess in guarded settlements. Solidifying their group identity is a religion of self-worship and a perpetual defensive war against guerrilla fighters who are funded through East Asia. This upper class considers themselves so superior to the plebs that the increasingly well-organized resistance movement takes them completely by surprise.

Adrian Schwarz, Senior Storm Unit Leader in the Black Corps and employee at the Reich Genealogy Office, lives in Reichsburg with his sister wives Godela and Gundula, both blond, blue-eyed, and fertile. Yet, for years he has carried on a lustful affair with the temperamental Russian, Ludmila. The two go to great lengths to cover their footsteps, hiding from the watchful cameras of the Department of Central Conscience at every turn. If their relationship is discovered, will the current Leader send Adrian into exile for miscegenation? What will happen to their illegitimate, mixed-race son? Or will the Leader’s Islamic guard, the Handschar, who know no race, seize power in a military coup before Adrian is ever found out?

In Artam, decisions are not made according to one’s gut instincts; they are made based on cost-benefit analysis. At the end of the day, everything is calculable—except, of course, the surprise rebel attacks and the intentions of the Handschar. It becomes clear in Artam, as in real life, that a dictatorship cannot persist for eternity, regardless of how brilliant its scientists and generals, regardless of how pedantic and effective its intelligence officials. What happens after the overthrow remains to be seen: life seems to be a game with hidden rules. Any rules that are imposed can only hope to suppress the potential for anarchy, but can never neutralize it.

With alarming inner logic, our time is drifting toward the Great Chaos. This novel is a fascinating and realistic story that combines political analysis with a forecast for the future. Its world is intentionally reminiscent of the alternative societies created by George Orwell in 1984 and by Aldous Huxley in Brave New World. But readers will have to decide for themselves at the end whether they have read a utopian or a dystopian science fiction.
Available ebook formats: epub mobi pdf lrf pdb txt html
First 10% Sample: epub mobi (Kindle) lrf more Online Reader
pdb
Price: $6.50 USD
Buy Add to Library Give as a Gift
How gifting works
Create Widget
Tags: history race dystopia utopia german europe alternative history genetics dictatorship political analysis
About Volkmar Weiss

ABOUT THE AUTHOR:
Volkmar Weiss, born in 1944, is a German geneticist and historian. He graduated from Humboldt University of Berlin with a doctor of science degree in 1972, after presenting his dissertation on the heredity of intellectual giftedness for mathematics and technology. In 1990, he earned his postdoctoral qualification as a geneticist with the book Psychogenetik: Humangenetik in Psychologie und Psychiatrie [Psychogenetics: Human Genetics in Psychology and Psychiatry] and in 1993 as a social historian with the book Bevölkerung und soziale Mobilität: Sachsen 1550–1880 [Population and Social Mobility: Saxony 1550–1880]. From 1990 to 2007, he was head of the German Central Office for Genealogy. In 2000, he published Die IQ-Falle: Intelligenz, Sozialstruktur und Politik [The IQ Case: Intelligence, Social Structure, and Politics]. He has spent his retirement writing nonfiction books and alternative history novels, among them, in 2012, Die Intelligenz und ihre Feinde: Aufstieg und Niedergang der Industriegesellschaft [Intelligence and Its Enemies: The Rise and Decline of Industrial Society] and, in 2007, Das Reich Artam: Die alternative Geschichte 1941–2099 [The Reich Artam: The Alternative History 1941–2099].

ABOUT THE TRANSLATOR:
Tanya Fox was born in Melbourne, Australia. She earned a dual bachelor’s degree in German and applied ethics from Queensland University of Technology in Australia and Universität Tübingen in Germany. She began translating in 1998 while teaching in the English department at Universität Tübingen, where she translated academic papers for her German colleagues. She currently lives in the United States, contracting as a German translator for various international clients and as a freelance proofreader and editor for a number of English-language publishers.
She can be contacted at teedee10@hotmail.com for inquiries about publishing projects.

Reviews of Artam: One Reich, One Race, a Tenth Leader by Volkmar Weiss

You have subscribed to alerts for Volkmar Weiss.

You have been added to Volkmar Weiss's favorite list.

You can also sign-up to receive email notifications whenever Volkmar Weiss releases a new book.