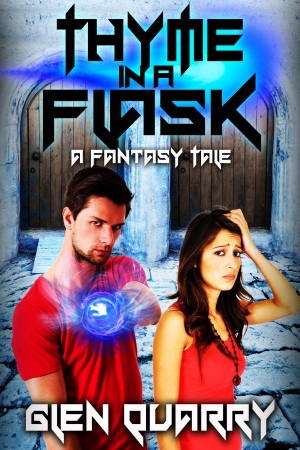 Thyme in a Flask

By Glen Quarry
Rated 4.00/5 based on 1 review
Danger follows teens Jon and Dorthea as they search for a secret talisman. Their travels take them to an alternate world, one where demons roam and rule, and from which there is no return without solving a riddle written by an earlier traveler. Their indifferent relationship evolves into one of friendship as they face dangers together in a humorous, and sometimes tense, experience. More
Pursued by a shadowy demon, teenagers Jon and Dorthea enter a parallel world, billions of light-years from earth, to retrieve an important talisman. Dangers abound on every side, including the fear they may never find their way home again. There is humor along the way and a riddle to solve. Colorful characters fill the pages; a traitorous wizard, an infamous Queen and a sharp-tongued Uncle. A friendly giant befriends a tiny sprite in distress.
A tense confrontation in the alternate world and an unexpected twist will leave the reader spell-bound. The story is set in primitive times when magicians still dictate the affairs of the world and haunt the lives of the innocent.
If you love magic, wizards and fantasy, don't miss this gripping new read.
Download: epub mobi (Kindle) pdf more Online Reader
rtf lrf pdb txt
Price: Free! USD
Add to Library
Create Widget
Tags: fantasy parallel world riddles fiction action adventure fantasy about a magician spell caster wizards and magic fantasy about a kingdom magician novel magician battles
About Glen Quarry

Glen is a fantasy writer from a tiny town in the midwest. An avid reader himself, he has a love for fantasy fiction, and it is in this genre that he's chosen to write. He works as a press operator in the printing industry.

Glen's small hometown is set in some of the most fertile farm ground of the heartland, not unlike the hamlets and towns in the fairy-tale land he has brought to life.

His hobbies include bicycling and wood working.

Reviews of Thyme in a Flask by Glen Quarry

*I received this book for free in exchange for an honest review.*

From the start this book had a very old-time, classic, fairytale feel about it. I think that kind of writing, which I haven’t read in quite some time, felt almost like being sucked in as though it were a bedtime story.

The writing was engaging, and the story was filled with great settings, a variety of sub-plots, and interesting characters.

I have to admit Samuel was probably my favourite character of the lot :D He had a sort of down-to-earth personality which I hooked onto immediately.

But the writing throughout this and the feel of that classic fantasy just held my interest until the end.

It is one of those stories that I enjoyed but can’t really talk about for fear of giving away spoilers as there was so much packed into this book! You can be certain of plenty of fantastical creatures and memorable moments throughout though.

I will admit I found it a bit overwhelming to keep up with so much to begin with, but the further I got pulled into the book, the easier my mind just flowed with the story and I found my imagination going into overdrive there was just so much to think of.

It is a more in-depth book, one you probably would have to give a bit of time to (at least for me anyway), but the flow and writing were easy to read, which certainly helped to keep me going and wanting to find out more about the array of characters and plots within this novel.

Overall, it’s a great read with a real fairytale, class fantasy feel about it. Anyone who enjoys this genre should definitely give this book a look!

You have subscribed to Smashwords Alerts new release notifications for Glen Quarry.

You have been added to Glen Quarry's favorite list.

You can also sign-up to receive email notifications whenever Glen Quarry releases a new book.