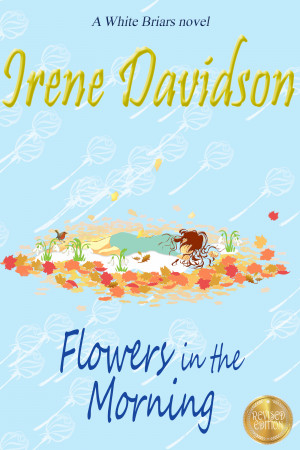 Flowers in the Morning

By Irene Davidson
Hamish discovers White Briars, an idyllic Gothic cottage set in a rambling, unkempt garden surrounded by woods in Kent, England. Upon moving in, he saves the life of Liana, a flower sylph who has slept years away in an attempt to flee from the grief of repeated loss …but in waking previously-immortal Liana, the garden's guardian has inadvertently also awoken Green Jack, a malevolent sprite. More
Hamish, a successful artist whose personal tragedies have left him broken and exhausted, is tired of London and life. He is searching for a new home in the south of England, believing that if he can find the perfect place to live in a countryside location it will give him the boost he needs to get his life back on track. His quest leads him to a forgotten corner of Kent and White Briars, where he stumbles upon a delightful Gothic cottage in a run-down but idyllic garden setting. Moving into the cottage he begins restoring the garden but discovers that it holds more than he anticipated – it is home to Liana, an immortal flower sylph whose prolonged grief makes his loss pale into insignificance.
Liana has slept many years away in an attempt to hide from the repeated anguish of losing all those she loves but her absence has left a vacuum. In reawakening Liana the garden’s guardian inadvertently quickens another malevolent spirit, previously banished who plans to wrest power over the garden.
Liana and Hamish must find a way to help one another heal –and by doing so, start a process that will allow the garden to recover its former harmony and balance.
Download: epub mobi (Kindle) pdf more Online Reader
lrf pdb txt
Price: Free! USD
Add to Library
Create Widget
Tags: romance sculptor magical realism english garden garden design love after loss artist and love classic landscape architecture flower sylph gothic architecture
About Irene Davidson

Irene Davidson is the writing pseudonym of Adrienne Oaks.
She has a Bachelor’s degree in Science (major in Botany) followed by two years post-graduate study in Landscape Architecture, one year in secondary teaching training and a year of psychology, social geography and design. She is taking a well-earned rest from further tertiary education for now.
Growing up in the far south of the far south of New Zealand, she soon noted that it was a very long way from ...anywhere. She started travelling as a secondary school exchange student to that ‘other’ south, …Tennessee, USA.
Post her post-graduate diploma, she flew to London, where she worked in several jobs, including Landscape Architect in a building overlooking Buckingham Palace’s gardens, before producing the first of two wonderful children. Her CV now consists of a curious mélange of academic achievements, places travelled and an unusual mix of workplaces ...she could also add several months of ‘Chateau cleaning’ in France to her résumé but feels it may reduce the tone somewhat.
She utilises the bountiful experiences she has garnered from all this travelling and working abroad in her writing.
Having returned to that ‘other’ south in 2016, after a year of living in Chattanooga, she has recently relocated to Washington State with her husband and their rescued ex-racing greyhound …who sleeps in Seattle while she writes.

You have subscribed to alerts for Irene Davidson.

You have been added to Irene Davidson's favorite list.

You can also sign-up to receive email notifications whenever Irene Davidson releases a new book.